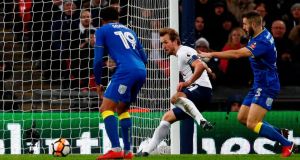 AFC Wimbledon held out for an hour at Wembley Stadium, hit the bar in the first half, brought a huge vocal support from South London, but were eventually picked off by Harry Kane. By the end a 3-0 scoreline was a fair enough reflection of Tottenham Hotspur’s possession, and an understandable dominance in this FA Cup third round tie against opponents who currently sit 21st in League One.

It is 30 years since that famous FA Cup final win against Liverpool, the last time Wimbledon – franchised identity theft aside – were at Wembley in this competition. The world has changed dramatically since then, with Wimbledon, the FA Cup and indeed football itself utterly transformed. Wimbledon came here as distant underdogs, although it is unlikely Jimmy Abdou called Moussa Dembélé over in the tunnel and informed him he was about to rip his ear off, as Vinny Jones may or may not have suggested to Steve McMahon depending on who you believe

On a finger-numbing day at Wembley, Tottenham made the usual slew of changes, with Juan Foyth and Kyle Walker-Peters coming in, although the presence of Kane was a nod to the importance of this competition, a major trophy Spurs might reasonably expect to win.

They did, though, come up against well-drilled, fast-breaking opponents on a day when AFC Wimbledon were a credit to the enduring strength of English football’s professional levels. But then days like these are what the FA Cup is for, the kind of occasion only early January can deliver, with a genuine festival feel to the day.

AFC Wimbledon remain one of the great English football stories of the modern era, and the lunchtime trains north were crammed with Wimbledon fans in a state of genteel, celebratory excitement over their trip to Wembley, a significant marker in this club’s very pointed grass roots success.

As the game kicked off in sunshine Kieran Trippier and Walker-Peters went wide and stayed there as Spurs dominated the opening moments. Three times the ball was fizzed across the Wimbledon penalty area, each time just away from Kane or Fernando Llorente. Walker-Peters in particular was playing like a Matthews-era winger, a furiously jinking figure tied to the Wembley touchline, although the urge to cut inside to deliver a cross tended to blur the effect.

Wimbledon had set out in a 4-5-1, with Lyle Taylor an isolated front man, and Abdou and Liam Trotter hurling themselves into the path of the white shirts in a deep, dogged midfield. There were 7,500 Wimbledon fans inside Wembley on a day when this giant grey bowl had its entire top tier emptied out.

The first moment of concerted possession for the blue shirts arrived after 23 minutes and was rapturously cheered, but not as loudly as Kane’s miss at the other end moments later, blasted over after Llorente had laid back Trippier’s cross.

For all their deep defence, Wimbledon might have opened the scoring just before the half hour as Abdou hit the underside of the bar, curling in a shot from Taylor’s lay-back that Michel Vorm got his fingertips to.

As Wimbledon fell back again, Spurs were reduced to spanking in long hopeful shots. And in a way Tottenham’s huffing and puffing here did reflect the absence of those other gears Mauricio Pochettino is still keen to add to this team. Without Christian Eriksen to feed those cute, snaking passes between defenders, Spurs simply battered away at that ten-man double-layer of blue.

Érik Lamela did finally manage to run off the back of the Wimbledon defence with 40 minutes gone, slid in by a nice little through pass from Kane. George Long made a fine save at his feet, but Lamela really should have scored.

As half-time arrived the Wimbledon players walked off to huge cheers, and then came out a bit late too, indulging in a little late-minute warm up drill with cones as Spurs stood ready to kick off. After which it was much of the same.

As Wimbledon fell back again, Dembélé ambled forward and hit a low hard shot on to the foot of the near post from 20 yards. And the opening goal finally arrived on 61 minutes. Trippier played Dembélé down the right and his cross was turned in by Kane in front of goal.

Moments later it was two, Kane scoring again from close range after Walker-Peters had burst through and had a shot that was blocked. Dele Alli came on for Sissoko and was booed by the away fans, for complex historical reasons not, it must be said, much to do with him.

And with 70 minutes gone it was 3-0, Jan Vertonghen stepping forward and placing a spectacular long shot in the top corner beyond Long’s dive. Spurs had scored three in seven minutes, Wimbledon looked suddenly a little leg-weary. Their fans, though, stayed put, applauding the players off at the end of an occasion to be cherished for more reasons than simply the day out. – Guardian service