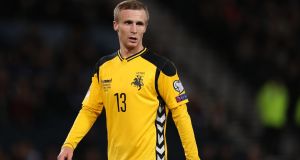 Dundalk have announced what is expected to be the first of three significant signings this week with Lithuanian international midfielder Karolis Chvedukas arriving at the club from Suduva Marijampole.

The 26-year-old has had two brief stints away from his homeland over the past couple of years, spending time with RNK Split in Croatia and Polish second tier side Chojniczanka Chojnice, but he has played for his home town team for the bulk of his career, winning a Lithuanian Cup with them in 2009.

He is an established member of the Lithuanian squad having made his senior international debut in 2014 and featured in five World Cup qualifying games for his country although he generally starts competitive matches on the bench.

He arrives at a time when Stephen Kenny is trying to improve his squad after Dundalk lost out to Cork City in both the league and cup last season. The club have also announced that 20-year-old midfielder Georgie Poynton, who spent last season on loan with Bohemians, has re-signed for the coming season.

Waren O’Hora, meanwhile, is due to sign with Premier League club Brighton on Monday after having impressed at Dalymount Park over the course of last season. The 18-year-old defender had previously featured in the Dublin club’s underage sides.