Relief but no celebration for Pochettino as Spurs down Saints 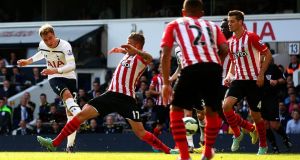 When Christian Eriksen’s beautifully threaded low shot hit the back of the Southampton net, Mauricio Pochettino turned on his heels and walked purposefully back towards his seat on the bench. Hands plunged deep into his pockets, he did not betray a flicker of emotion.

The Tottenham Hotspur manager had said that he would not celebrate against his old club, the one he left at the end of last season for the new challenge at White Hart Lane, because he had too much respect for them. It was evident at full-time, as he hugged many of his former players and members of technical staff before beating a retreat down the tunnel.

But the passions would have swirled inside of him. Pochettino needed this.

Tottenham needed this. After four Premier League matches without a win, the grumbling had started. This brought respite and encouragement.

It might have been a different story had Sadio Mané not spurned a glorious chance in the 84th minute, when he somehow missed his kick with the goal at his mercy but Tottenham were just about value for the victory.

The bottom line, though, was the result. A win for in-form Southampton would have lifted them eight points clear of Tottenham and led to all manner of uncomfortable headlines for Pochettino.

Tottenham had flickered at the very outset and they proceeded to knock harder at the door as the first half wore on. It was an absorbing game, fired by Jan Vertonghen’s early looping header that Ryan Bertrand cleared from in front of the Southampton line and, although the visitors played their part, it was Tottenham who looked the more threatening team before the interval.

Erik Lamela darted forward with menace and he drew a finger-tips save from Fraser Forster after one burst and low shot while the Southampton goalkeeper fumbled a more routine-looking Eriksen effort around his post on 36 minutes.

Eriksen put Tottenham in charge shortly afterwards and his second goal of the season did not permit Forster the luxury of any contact. Emmanuel Adebayor, who regularly drifted into wide areas, overloading Southampton on the flanks, played the ball inside from the left and Nacer Chadli flicked into Eriksen’s path. The midfielder’s precision swat from 20 yards flashed into the bottom corner.

Pochettino kept a lid on the surge of emotion and he almost saw Chadli double Tottenham’s advantage on 43 minutes. Lamela and Adebayor combined and, having taken a decisive first touch, Chadli sprinted clear on Forster’s goal. His pace and power was impressive but the finish was fractionally off target, the ball coming back off the far post.

Southampton had arrived on the back of six straight wins (four of them in the league) and there were flashes from them, including a first-half purple patch in which Mané, the pacey wide attacker, was prominent. He saw one shot blocked by Kyle Naughton and a dangerous cross from the right similarly repelled by the Tottenham full back.

There was also a moment when Mané’s centre from the left almost allowed Morgan Schneiderlin to bundle home. Having tried and failed to force a summer transfer to White Hart Lane, that would have been quite a moment for Schneiderlin.

Southampton’s travelling fans baited Pochettino, asking him where his translator had gone, along with other, more choice chants while on the field there were full-blooded tackles and some which seemed to over-step the line – chiefly when Bertrand left his studs in on Naughton. The Tottenham player was forced off.

The tempo was unrelenting and there was controversy early in the second half when Mané sprinted towards the Tottenham goal and was met, shoulder-to-shoulder, by Younès Kaboul, who was the last defender. Mané went down and when the referee, Mike Jones, blew for the foul, it looked as though he had to dismiss the Tottenham captain. He opted for yellow, which came as a big relief to Tottenham. They argued that it ought not to have been a foul in the first place.

Mané was one of six new signings in the Southampton team and it is remarkable how quickly they have settled. Pochettino, by contrast, had no summer signings in his starting line-up. He has been charged with getting more from the club’s recruits from the previous summer, who arrived under André Villas-Boas. Lamela, Chadli and Étienne Capoue have been beneficiaries under Pochettino.

Southampton stuck to their principles in the second half and they came agonisingly close to the equaliser. After Kaboul’s miscued clearance, Victor Wanyama looked odds-on to score only for Hugo Lloris to save smartly while in the 84th minute, Bertrand’s devilish cross from the left was made to measure for Mané in front of goal. Inexplicably, he failed to apply the decisive touch.

Adebayor had shouted loudly for a penalty following Toby Alderweireld’s push only for Jones to ignore him – a harsh decision– but it did not matter to Tottenham in the end. Pochettino could exhale upon the full-time whistle.