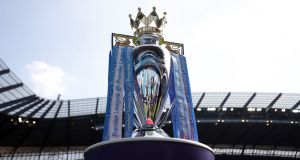 The issue of finishing the Premier League season by June 30th was not raised when top-flight clubs met on Friday. Photograph: Martin Rickett/PA Wire

The return of Premier League football is dependent on the roll-out of mass coronavirus testing, clubs learned on Friday.

In a two-hour video conference, representatives of English football’s top 20 teams met with league officials to discuss various scenarios for bringing back the competition.

While speculation prior to the meeting centred on a proposal from some clubs to curtail the league by June 30th, it is understood the topic was not even discussed as, instead, the medical challenges in resuming the competition came to the fore.

League staff have been working with club doctors to devise a series of protocols that would allow top-flight football to return in a “safe and appropriate” manner. These are the rules that would apply in training and matches to safeguard against the spread of the virus.

One key aspect of the protocols would be testing. While the presumption is that any resumption of the 2019-20 season would be made behind closed doors, testing of everyone involved in a given event – from players, to coaching and medical staff, match officials and TV broadcast crews – would be necessary.

A recent calculation in relation to the German Bundesliga’s plans for “ghost games” estimated 240 people would be required for each match. Currently the UK government claims capacity for 38,000 tests a day across the whole country, with 18,665 carried out on Thursday.

The Premier League is clear that football will only return when the government says it is safe to do so and it is understood that the league will seek specific approval for the use of tests. Some clubs are believed to be confident that there will be enough testing capacity to allow matches to be played in June.

A Premier League spokesperson reiterated the desire to complete this season if at all possible. “We are acutely aware of the distress Covid-19 is causing and our thoughts are with all those directly affected by the pandemic,” they said.

“In common with other businesses and industries, the Premier League and our clubs are working through complex planning scenarios. We are actively engaging with stakeholders, including broadcast partners, and our aim is to ensure we are in a position to resume playing when it is safe to do so and with the full support of the government. The health and wellbeing of players, coaches, managers, club staff and supporters are our priority and the league will only restart when medical guidance allows.

“Today’s shareholders’ meeting provided an opportunity to discuss possible scheduling models. It remains our objective to complete the 2019-20 season but at this stage all dates are tentative while the impact of Covid-19 develops.

“In response to the pandemic, the Premier League, our clubs and players have provided vital support for communities and the NHS and will continue to do so after matches recommence.” – Guardian