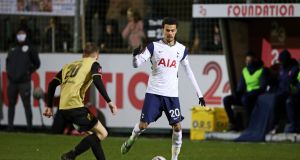 Paris Saint-Germain are hoping to sign Dele Alli on loan this month, with Mauricio Pochettino having told the club hierarchy that the Tottenham midfielder is his main target this transfer window.

Pochettino and Alli worked together with great success for more than four years at Tottenham and the Argentinian has told PSG he thinks Alli can make a great contribution for the remainder of the season. The Ligue 1 side have also been linked with another former Tottenham player, Christian Eriksen, but it is Alli that Pochettino is interested in.

Alli is keen for a change for six months, having fallen down the pecking order at Spurs under José Mourinho. The midfielder has made only four league appearances this season, totalling 74 minutes, playing a further six games in the Europa League and two domestic cup ties.

Tottenham are reluctant to let Alli leave on loan with the chairman, Daniel Levy, and Mourinho in agreement that every player will be needed during a hectic six months. Spurs have reached the Carabao Cup final, are still in the FA Cup and Europa League and are only six points behind the Premier League leaders, Manchester United.

The 24-year-old has not fallen out with anyone at the club but does want to play more minutes, especially with the European Championship coming up in the summer, should the tournament go ahead. Further talks between the clubs are set to take place over the next few days. - Guardian