Draw will give Liverpool a boost but title challenge is over 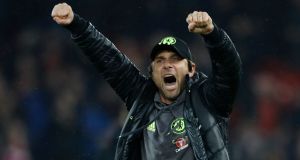 Chelsea manager Antonio Conte celebrates after his side drew 1-1 with Liverpool at Anfield to go nine points clear at the top of the Premier League. Photo: Carl Recine/Reuters

Simon Mignolet denied Diego Costa the chance to extinguish Liverpool’s lingering title hopes from the penalty spot, Anfield went wild and so did Jürgen Klopp in the face of the fourth official, Neil Swarbrick. A release from a month of torment, a moment of defiance, but Mignolet’s performance was in keeping with a conflicting night for Liverpool: one tinged with regret.

This was a display vastly improved from recent outings, and against a Chelsea team looking every inch the next champions of the Premier League, with encouragement for Klopp in the return of key personnel, energy and intent. But as he had conceded before kick-off, Liverpool could ill-afford to waste any more time or points if they were to reignite a title challenge. Ten points between fourth and first is an ominous gap even with 15 matches remaining.

Mignolet encapsulated Liverpool’s night in word and deed. “I’m happy with that [penalty]save but the feeling is disappointment with the draw,” he said. “We deserved the three points.”

They may well have got them but for a collective lapse in concentration that allowed David Luiz to open the scoring with a cheeky free-kick taken while Mignolet’s thoughts were elsewhere.

“I did not hear the whistle and he hit it early,” the keeper said. “You have to give yourself a chance to save it but I never had that chance.”

Klopp absolved his keeper from blame, mindful of avoiding another distracting inquest over that position, claiming the free-kick was “really smart, really clever and really well taken”, before adding: “Of course if he stands next to the post it is an easy save.” The lapse removed the gloss from what was otherwise an impressive reaction from Liverpool.

A frenetic start was reminiscent of the blistering form that raised the prospect of a title challenge before January chilled several ambitions. From the first whistle Liverpool were encamped deep in Chelsea territory, snapping into every challenge, pressing relentlessly and clearly unsettling the league leaders by refusing to allow them to build from the back.

It was strange to witness Conte’s commanding team open so hesitantly. Thibaut Courtois, Nemanja Matic, César Azpilicueta and Marcos Alonso were all guilty of making forced errors inside the opening 15 minutes as Liverpool made life deeply uncomfortable for the visitors. Except for where it matters most.

Liverpool’s failure to turn dangerous possession into clear-cut opportunity in the first half was another recurring theme, one that has contributed largely to recent setbacks. Having Sadio Mané, Philippe Coutinho, Roberto Firmino and Adam Lallana available – and the four have not started together since the 6-1 defeat of Watford on 6 November – will inevitably assist that cause but Mané started on the bench here having arrived back from the Africa Cup of Nations in Gabon late on Monday.

outinho looked his sharpest since returning from an ankle ligament injury but too many of his final balls were over-hit. He was not alone on that score as Liverpool’s attacking threat in the first half was limited to a long-range shot from Georginio Wijnaldum that Courtois pushed away.

Once Chelsea settled the contrast with Liverpool became increasingly apparent. With Eden Hazard a constant menace and Willian plus Victor Moses an outlet down the right, the visitors’ attack carried greater purpose and threat. Not for the first time, the respective quality of the defences also came down in favour of Chelsea.

Joël Matip chose a bad night to produce his most inauspicious performance in a Liverpool shirt. His poor control and distribution enabled Hazard and Diego Costa to grow into the contest but his individual errors paled in comparison to the collective failure that contributed to David Luiz’s opener. A weak wall, Mignolet leaving his near post to bark orders as the defender commenced his run-up and no one in red appearing to notice; Liverpool’s concentration deserted them as Chelsea edged in front and put Anfield on edge in the process.

The second-half recovery was a credit to Liverpool’s refusal to accept another defeat on home soil, Wijnaldum’s equaliser a reflection of their desire as he stretched in front of David Luiz to head home. The mood around the ground had dampened as the interval approached with too many misplaced passes stretching the patience of the crowd. There was nothing unusual about Klopp turning to face the main stand and demanding a reaction from supporters but it was strange to hear fans having a go back.

As always, responsibility rests with the team to dictate emotions and a show of commitment plus greater invention from Liverpool after the restart soon restored the volume levels. Now it must be sustained. The title may have slipped out of reach – though their manager will not give up on that – but, on this form, Liverpool will soon re-emerge from their slumber.