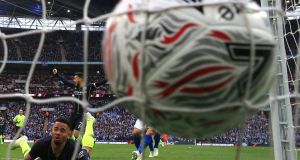 Pep Guardiola insists it is “almost impossible” for Manchester City to win the quadruple despite keeping that dream alive by beating Brighton to reach the FA Cup final.

City will return to Wembley on May 18th to face Wolves or Watford after Gabriel Jesus’s fourth-minute header sealed a 1-0 victory against Chris Hughton’s well-organised side.

FA Cup glory is now just a win away for Guardiola’s men, who have already wrapped up the Carabao Cup and remain in the Premier League driving seat as they boast a game in hand on leaders Liverpool.

Attention now turns to the Champions League and Tuesday’s quarter-final first-leg clash at Tottenham, but the City boss has tried to downplay growing talk of the quadruple.

“I will announce you something: it’s almost impossible to win the quadruple,” Guardiola said.

“Almost. So, put it in the headlines, guys: ‘Almost impossible to win the quadruple’.

“Surviving in that stage with all competitions is already a miracle, so it’s nice to be there.

“[Being in contention still] is why it is incredible what these players have done last season when you achieve 100 points. Not Liverpool, not Manchester City can repeat that.

“The year after, when you have the tendency to be a little bit more arrogant or a little more presumptuous or think something like that, really you are not.

“And still we are there, so that’s why it’s incredible what these players have done so far.

“Every game we lose players but that is normal when you play a lot of games. But we are going to try until the end, every game.”

Guardiola is hoping that Sergio Agüero will be fit when City take on Tottenham as the absent striker is “much, much better” after a muscle issue, but Kyle Walker looks a doubt to face his former club.

The right back was caught up in controversy during the first half after a coming together with Brighton’s Alireza Jahanbakhsh, but avoided a red card following a Video Assistant Referee review.

Walker was taken off at half-time, but Guardiola insists it was injury-related.

“I didn’t see it,” Guardiola said of the incident with Jahanbakhsh. “What I saw and the people tell me he didn’t touch.

“No [I didn’t bring him off because he was on a yellow card], he had problems in the back, in the hamstring, he could not run.”

Brighton counterpart Hughton has seen the incident back three or four times and was disappointed that Walker was not sent off.

“In my opinion, it was a red card,” Hughton said. “We ask the players to be honest.

“Alireza doesn’t make a big meal of it. We certainly would have seen in the past players clutching their head, rolling on the floor, so I don’t think he makes a big deal of it.

“But certainly if I look at the action, which I have done, there would have been numerous circumstances where that exact same action would have got somebody a red card.

“I think there was sufficient force in the action to warrant that.”

Asked if the unsuccessful VAR review made it all the more galling, the Albion boss said: “Yes, because I think we’re at a stage now where everybody is pushing for it.

“I’m probably one that has been converted a little bit and I am still not sure how far it is going to take us.

“But, yes, I’m even more disappointed with the fact this was a VAR [decision].”

But amid the natural disappointment of losing a second ever FA Cup semi-final was pride in Brighton’s display.

“I am incredibly proud,” Hughton said. “After conceding after three minutes I don’t think there was anyone in the stadium that thought the second wasn’t going to come.

“We hung in and to go through the 90 minutes and, apart from the goal, I struggle to think of a real clear chance.

“That wouldn’t have happened often, if at all, to them this season.”

1 LeBron James among those to slam Drew Brees’ anthem comments
2 How a GAA club sprang up in east Belfast over Sunday breakfast
3 GAA players spend just 2.5 seconds within 2m of each other during play
4 Connacht continue player hunt as six academy graduates promoted
5 Eoin Murchan on being the wrong player in the right place at the right time
Real news has value SUBSCRIBE