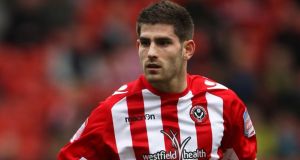 club Oldham Athletic have abandoned a controversial attempt to sign convicted rapist Ched Evans, claiming a backlash from sponsors and death threats caused it to pull the plug.

The latest twist to the striker’s attempt to return to football after being released on licence after serving half of a five-year sentence came as he apologised for the first time for the “effects” of a night out in Rhyl in 2012 that ended in his conviction for raping a 19-year-old woman.

But Evans also blamed “mob rule” for the collapse of the transfer.

“Sadly the ‘mob rule’ tactics employed by the more radical elements of our society and the constant media reporting has had the desired influence on some sponsors and the club would face significant financial pressure if I joined them,” he said.

Evans said he was concerned that the withdrawal of sponsors could jeopardise the construction of a new stand at Oldham and cause jobs to be put at risk.

Despite sponsors including Mecca, Nando’s, Zen Office and Verlin Rainwater Solutions saying they would sever their links if he signed, Oldham appeared determined to press on until Thursday’s dramatic U-turn.

“The whole issue has divided opinion and the club has been put under unbearable pressure as a result,” said Oldham’s chief executive, Neil Joy. “Proceeding could have placed significant financial pressure on the club and continued to be a divisive influence. As a consequence the deal could not go ahead.”

Despite rumours that the owner and chairman Simon Corney planned to resign in frustration, he said he had not quit but planned to “take a long, good look at his own position” in the coming days. Guardian Service