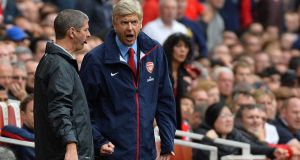 Arsenal manager Arsene Wenger disappointed with the “spirit” referee Anthony Taylor brough to the Emirate where his side crashed to a 3-1 defeat to Aston Villa on the opening day of the new remier League season.

Wenger, who has so far failed to land any major summer transfer targets, saw his side racing into an early lead through Olivier Giroud. However, Villa — who spent much of last season battling against relegation — hit back when Christian Benteke equalised from a penalty rebound.

In what proved to be the defining moment of the match, the visitors were awarded a controversial penalty on the hour when Laurent Koscielny looked to have won the ball in his challenge with Gabriel Agbonlahor, before Benteke netted from the spot.

The France defender, booked for his challenge, was then soon shown a second yellow by Taylor for clattering into Andreas Weimann Arsenal — who face a crucial Champions League play-off first leg away to Fenerbahce on Wednesday — rallied with 10 men, but were not able to break down a determined Villa defence, as goalkeeper Brad Guzan made a couple of smart saves.

New signing Antonio Luna added a late third for the visitors — before unhappy chants of ”spend some money” rang out from the home support at full-time.

Wenger, though, was left perplexed by the whole series of events in a match which was also notable for featuring the first use of the Premier League’s new goal decision system (GDS) when a 52nd-minute effort from Villa midfielder Fabian Delph struck the inside of the right-hand post and rolled across the line.

“I would understand if the linesman said it was a penalty, but you have to live with that and just because you get these decisions given against you that doesn’t mean you should go on to lose the game.”

The Arsenal manager added: “Not only did we lose the game, we had many kicks, many injuries. We have some problems for some people to recover for Wednesday night.”

Wenger felt his team had once again played out their opening fixture in a negative atmosphere because of criticism over the club’s lack of moves in the transfer market, having failed to secure the signatures of both Gonzalo Higuain and Luis Suarez.

“You got what you wanted, you should be happy,” Wenger said to reporters in his post-match press conference. “Before the start the season that was all you write in the papers so what do you expect?”

Wenger, though, insisted today’s defeat was not down to a lack of summer investment.

“Could we have won the game with the players we had on the pitch? I say yes,” he continued. “If we don’t spend the money, it is because we don’t find the players.

“I am not the only one to work on that, we are a team that works on that and we are ready to buy the players if we find the players good enough for us.

“My job is to make the fans happy, but we haven’t lost a game because of that (not spending). We take our work seriously and we analyse every player in the world and spend 24 hours a day doing that.

“We are ready to spend, but until we buy players we have to win football games and it is not an excuse not to win the game today.”

“I think everybody up and down the country would have thought it was a home banker really, but I have got lads in there who are really good, top footballers,” said Lambert, whose side travel to Chelsea on Wednesday night. “The no-fear attitude was key. Because we are young, everyone probably thought there would be an adverse reaction to it, but I have got to give them a lot of credit.”