Not major anymore? Mourinho contradicts himself over League Cup

‘If you ask could English football survive or be better without this competition? Maybe’ 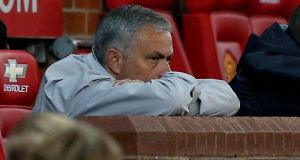 Manchester United manager Jose Mourinho believes English football could survive without the League Cup — and may even be better off without it.

Seven months after lifting the trophy at Wembley, United began their defence of what is now called the Carabao Cup by comfortably overcoming Sky Bet Championship side Burton.

Marcus Rashford’s brace was complemented by goals from Jesse Lingard and Anthony Martial on a night when Lloyd Dyer netted a late consolation in a win as comfortable for Mourinho’s Reds as the 4-1 scoreline suggests.

Last season United finished in sixth place in the Premier League but went on to win the League Cup and later the Europa League. After winning the first of those Mourinho said; “I wanted very much to win a major trophy with every club and by doing that with Manchester United, it is quite a sense of relief. It was a big target for me to win a trophy with Manchester United but the reality is we want more. My contract is long, I have two more years plus this one so hopefully I can win something more this season. I know it is difficult, but the reality is we have to fight for more.

United’s strength in depth on Wednesday night allowed them to make nine alterations without a noticeable dip in quality — but the visitors’ nine changes meant it was likely to be a matter of how many the hosts scored.

The fact Burton view the early weeks of the league season as more important than a trip to Old Trafford highlights the issues with a competition that even last season’s triumphant manager Mourinho believes could be dispensable.

“You know, if the competition is an official competition, it is important for Manchester United and for me as a manager and I want the players to think the same way,” he told BBC Radio 5 Live.

“If you ask me could English football survive or even be better without this competition? Maybe. Maybe we would be fresher for European competitions, for example.

“If we can win it, we win it. If we don’t win it is because the opponents were better than us.”

It was a cutting remark about a competition that has run since the 1960-61 season — and a view the English Football League is sure not to share.

United’s reward for beating Burton is a trip to Swansea in the fourth round, with Mourinho happy to come through the Carabao Cup tie without any injury concerns or cards.

The manager was quick to praise his attacking quartet of Rashford, Juan Mata, Lingard and Martial, with the latter looking sharp throughout the 90 minutes.

“He is starting lots of times,” Mourinho said of Martial. “He started in the Champions League a few days ago, so he is always playing.

“I think he played every match, some starting, some from the bench.

“Of course I am happy with his performance, with his happiness on the pitch.

“He wanted to do things — a few things he did amazingly well, others not so well but he was always trying and, for me, that commitment, that happiness on the pitch is very important.”

Masters plan for November shows Augusta National is out of touch 22:30
Shane Lowry makes strong start with opening 69 at Muirfield Village 21:29
Richarlison’s touch of class rescues point for lacklustre Everton 21:11
Tottenham lucky not to leave Bournemouth empty-handed after another poor show 20:53
Dara O’Shea proves his worth with second goal for West Brom 20:30