Neymar number crunching adds up to a double Wayne Rooney 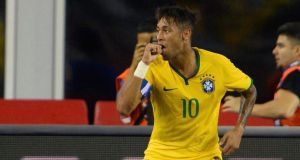 Brazil’s Neymar celebrates his second goal against the United States during a friendly at Gillette Stadium in Foxborough, Massachusetts. Photo: CJ Gunther/PA

Welcome back, then, the Premier League. On you go. No really. Don’t wait. Let me just sit here and get my breath back. There may have been more frothingly overexcited autumn international breaks than the one just past, a week made up almost entirely of having strident, angry opinions about Wayne Rooney while also offering the definitive hot take on the comparative intensity of international friendly competition in the 1950s (English football, as ever, right at the cutting edge of the modern game). But not many of them, and not by much.

It was a lovely moment watching Rooney reach his half-century of England goals, mainly because it’s a relief to see these cobwebbed old records swept aside, the row of stuffed and mounted heads steadily removed from the wall. But away from the records, and indeed from competitive international matches, for me the best pure footballing moment of the week happened on Tuesday night in Foxborough, Massachusetts during an otherwise room temperature 4-1 friendly defeat of the USA by Brazil.

The moment itself was the work of Neymar, who came on at half-time and spent 45 minutes playing like some gloriously weightless woodland sprite of an A-list footballer, and who in the lead-up to Brazil’s third goal performed the most seductively balletic dummy you’re likely to see, creating a route to goal simply by skipping out of the way and dragging three opposition players into a momentary limbo in search of that sudden Neymar-shaped absence.

Brazil were leading 2-0 at the time. Lucas Moura passed to Neymar who, rather than hold the ball did the opposite, producing a two-footed shimmy so graceful his marker seemed to have felt the need to wander off and think about it for a bit, a little dazed, a little drunk, allowing Lucas to run on and collect his own pass and create the third goal for Rafinha, a lovely little act of misdirection, the perfect non-touch.

Either side of which Neymar scored twice to lift his tally of Brazil goals to 46 in 67 matches. Zico, Romario and Ronaldo must all be hauled in before he gets anywhere near the thin, clear air of Pele-dom. But one thing seems clear. Neymar has the time, talent, fast start and, above all, the will to push this right to the end. Brazil will play 15 games a year every year. Barring injury, fallings-out or a crop of freakish talents all he needs to do is basically keep playing and he will eventually score 100 international goals, and from there go on to also pass Ali Daei’s all-time record of 109.

When he does we do at least know what to expect now. There will be revisionism, a shriek of collective goal-fury. Daei’s career opponents will be flatteringly rehashed, Gerd Muller’s goal-to-games ratio brandished about the place like a cosh. Neymar’s record will be picked apart. He has so far scored 33 goals in friendlies. But then what is he supposed to do? Brazil play a lot of friendlies. And Neymar is hardly a choker. He carried his nation halfway though a World Cup when most of his team-mates were playing like sad, frightened kittens.

Personally I have a feeling this could be Neymar’s season, a moment when he flexes his shoulders and moves to another level. There is no obvious ceiling to his gifts. This is player who can do pretty much anything with a football, who can dribble, finish and reel off some mind-bendingly subtle, high-grade tricks and swerves, one of those athletes who, like an Olympic sprinter, doesn’t really seem to touch the ground much, playing most of his matches hovering a little above the earth’s crust.

He is stronger too and a little more direct. For all the previous talk of bulking up Neymar really did look more slabbed and ripped against USA, able to burst through tackles, to shrug off opponents in possession, employing that wonderfully smooth lateral spring to glide past opponents and keep the game alive, Messi-style, rather than stumble at the slightest contact.

Best of all – and this was the real joy of that dummy against USA – he still seems to be genuinely enjoying all this, to have retained a kernel of something that is essentially Brazilian, the idea of football as a matter of trickery and cheek, a game to be played as much as a contest to be won.

Plus it might just have stretched him in another direction as he ticks on towards that distant century of goals. His task in the intervening years to ensure he is, as he surely will be, an entirely deserving all-time king of the numbers game. Guardian Service