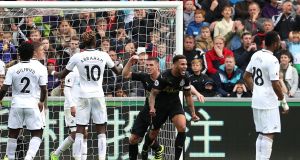 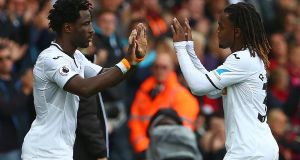 It has not been an easy few days for Rafael Benítez, who underwent surgery this week in relation to an infection following a hernia operation, but this result and performance will have done the Newcastle United manager’s recovery no harm whatsoever. Watching from his home in Merseyside, Benítez was able to enjoy the sight of Jamaal Lascelles scoring the only goal of the game to give Newcastle back-to-back Premier League wins and, in the process, dampen the feelgood factor that had swept through Swansea on the back of deadline day.

Renato Sanches was the headline act in that respect yet the Portugal international’s debut proved to be something of an anti-climax. Maybe that was always going to be the case because of the excitement and level of expectation that accompanied the news that he had joined on a season-loan loan deal from Bayern Munich. Looking a little off the pace, Sanches lasted 69 minutes before he was withdrawn.

Wilfried Bony, another deadline-day signing, came on his place but there was no fairytale return for the former Swansea striker. Newcastle, defending resolutely and restricting a toothless Swansea side to few chances, held on for a precious three points as Benítez’s name was chanted by the travelling supporters at the final whistle.

Although Swansea dominated possession early on, the home team rarely threatened. Too many times the ball went sideways or backwards rather than forwards as Swansea, adjusting to a new formation in which Leroy Fer was thrust into a more advanced midfield role, struggled to create much. Sanches, a surprise inclusion in the starting lineup given that he had only joined up with his new team-mates on Friday, began on the right of a narrow midfield and made an inauspicious start as his first few passes went astray.

Indeed it was Newcastle who should have taken the lead. Jacob Murphy squandered a half chance when he volleyed over after latching onto Federico Fernández’s wayward header and then came a breathtaking save from Lukasz Fabianski to deny Joselu. The Spaniard must have thought he had scored when he met Matt Ritchie’s superb cross with a twisting header but Fabianski, diving to his left, managed to get his fingertips to the ball to turn it around the post. It was a superb piece of goalkeeping.

Newcastle were finally starting to play with a bit more belief, although Mikel Merino was fortunate not to be booked for simulation when he darted between Alfie Mawson and Martin Olsson and tumbled to the ground looking for a penalty. Mike Jones, the referee, could easily have brandished a yellow card but instead gave nothing. At the other end Swansea finally registered a shot on target when Rob Elliot turned Jordan Ayew’s 18-yard shot behind. Mawson then ought to have scored from the corner that followed but headed narrowly wide.

Swansea started the second half with a bit more conviction. Tom Carroll, linking well with Ayew, saw his left-footed shot repelled by Elliot at the near post and four minutes later Tammy Abraham had a wonderful opportunity to put Swansea ahead. Running onto Fer’s slide-rule pass, Abraham rounded Elliot but saw his shot cleared off the line by Lascelles.

Sanches, running out of steam, was substituted and on came Bony as Paul Clement sought to give Swansea more of a presence further forward. Although Newcastle’s threat was sporadic, they were still very much in the game. Ayoze Pérez burst onto a pass from Ritchie and drilled a low shot that Fabianski blocked with his legs.

Then came the breakthrough and from Swansea’s point of view it was a dreadful goal to concede. Ritchie swung in a corner from the left and Lascelles, with far too much time and space, headed powerfully beyond Fabianski from six yards. Luciano Narsingh, set up by Bony, broke through on the right late on but the angle was against him and Elliot saved comfortably. This was Newcastle’s and Benítez’s day.