Burnley hang on to heap more pressure on Crystal Palace 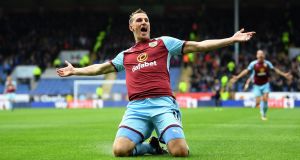 Frank de Boer was recruited to bring change to Crystal Palace and it is undeniable he has had an impact. The Eagles have made their worst start to a season for 92 years and stand alone among the 92 Premier and Football League clubs: everyone else has mustered at least one league goal. Palace instead gifted Burnley the decisive goal to render their manager’s position still more precarious.

De Boer’s appointment was described as “an amazing milestone” by the chairman, Steve Parish. Four league games into a three-year contract, he may face a decision if the Dutchman has become a millstone.

Defeat at Turf Moor came courtesy of a costly mistake, made by Chung-Yong Lee. Perhaps Palace will conclude that they were guilty of another, and that terminating De Boer’s tenure will prove the end of an error. Perhaps he will be afforded a reprieve. If so, a manager who has failed to beat Huddersfield, Liverpool, Swansea and now Burnley is in a private battle with himself. He lasted 85 days at Inter Milan. As of Monday he will be up to 77 at Palace.

After just three minutes De Boer was subjected to the schadenfreude of taunts about being “sacked in the morning”. Criticised for sideways passing in previous games, Palace were quick to supply a defence-splitting pass. Sadly for the recalled Lee, the defence he bisected was his own. Brought in to supply Christian Benteke, he instead picked out Chris Wood with a misguided attempt to find the goalkeeper Wayne Hennessey. Burnley’s record signing provided an assured finish to mark his first start.

The New Zealander’s late equaliser against Tottenham, coupled with the unavailability of the injured Jeff Hendrick, persuaded the manager, Sean Dyche, to promote him to the starting 11. That decision was soon vindicated, along with the move to 4-4-2 to give Palace’s porous defence a second striker to mark. Or, in this case, not to.

If both the goal and the manner of it suggested De Boer’s players were eager to hasten his exit, they responded. Their methodology – set-pieces and an aerial attack – may have owed more to Sam Allardyce than his successor, but it almost succeeded. After a corner, Scott Dann had a volley cleared off the line by Matthew Lowton. Two minutes later, Benteke headed narrowly wide. Then the unmarked James McArthur met Yohan Cabaye’s corner but missed the target.

Yet the damning element was how purposeless Palace were for large swathes of the game. They had greater reason to attack. Lee contrived, albeit indirectly, to trouble both goalkeepers. Burnley’s Tom Heaton landed awkwardly on his left shoulder claiming the South Korean’s cross. He had to go off, necessitating a Premier League debut for Nick Pope, but the understudy went largely untroubled until he dived to his left to deny Benteke. Dann was denied for a second time when James Tarkowski cleared his drive off the line. He also headed wastefully wide at the end.

But they were isolated alarms. A second half of possession without penetration offered reminders of Louis van Gaal’s sterile brand of football. De Boer, another Dutchman accused of dogmatism, had jettisoned his favoured 3-4-3 formation, but introducing the defender Jairo Riedewald when a goal was required seemed the sort of move his mentor might have made.

They remain pointless, goalless and perhaps luckless, deprived of the injured Wilfried Zaha while Mamadou Sakho was not yet deemed ready to make his second debut for the club. In contrast, Burnley could save the influence of Wood, their biggest summer buy. They had already beaten Chelsea and drawn with Tottenham.

More capital gains capped a profitable start to the season for a side who, while Palace wrestle with an identity crisis, are clear what they are and what they can and cannot do.