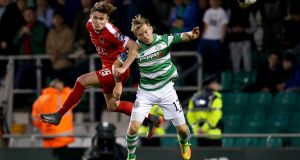 Approaching the first anniversary of his worst moment in management, achieving his best of them against the same opposition represented quite a turnaround for Stephen Bradley.

The decision of the Shamrock Rovers board to parachute a 31-year-old into the most high-profile job in Irish league football began to look like their latest mistake when they Rovers were humbled 5-0 by Cork City in the FAI Cup quarter-final last year.

This term hasn’t been without its disappointments either - Rovers have lost 11 league games - but this weekend they occupy an automatic European qualification place in the table with a winnable FAI Cup quarter-final to come on Friday.

They also have an EA Sports Cup final against Dundalk the following week.

In contrast to 12 months ago, Rovers’ first win over Cork this season can be attributed to how Bradley set up his team.

Aaron Bolger, still only 17, cut a composed figure in central midfield on his first league start of the season, showing some deft touches - but wasn’t afraid to mix it either.

Rovers’ opener stemmed from Tomer Chencinski’s long punt. Gary Shaw knocked it on, and Ronan Finn opted to let fly from 25 yards. Mark McNulty was well positioned by deal with the low effort, but a deflection off Alan Bennett wrong-footed his goalkeeper and gave the Hoops the lead.

Cork had little to offer in response as an attacking threat bar a couple of crosses that Chencinski batted away and Brandon Miele could have extended the hosts’ lead but nodded tamely at McNulty from six yards.

Miele more than atoned for his profligacy with a brilliantly-executed sixth goal of the season on 20 minutes. Trevor Clarke’s marauding run from his own half, skipping past four challenges along the way, made the space for Miele to drift into from the left and he unleashed a curling shot beyond the outstretched arm of McNulty.

To conclude a miserable half for Bennett, he was penalised for a push in the box as he looked to reduce the deficit and John Caulfield took him off at the interval as part of a double substitution.

Youngster Conor Ellis was thrust into attack, then later joined by another substitute, Achille Campion, and the comeback efforts yielded a goal with 20 minutes left through Gearoid Morrissey’s left-footed drive from distance.

That was to be the extent of their recovery, however, as Finn exploited space down to the left to cross for Michael O’Connor to add a third for Rovers with five minutes remaining.