Newcastle beat West Ham and the drop on final day 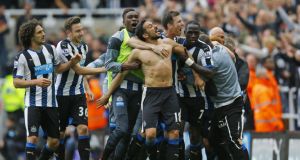 When it was all over, as Newcastle briefly allowed themselves to bask in a pleasure that had been a long time coming, one moment stood out. There was bitterness and there was rancour. Yet the mutiny, for once, was not that of the fans in black and white. “Fuck off Sam Allardyce, ” came the song from the away end. It was loud and jarring and that was the soundtrack that followed West Ham’s manager out of the club.

“You’re getting sacked in the morning,” also came down, unsparingly, from the most vertiginous part of the Leazes End. As it turned out, West Ham’s board could not even wait that long. His departure was confirmed within three minutes of the final whistle and his best attempts to put on a brave face, laughing his way through a series of awkward interviews, did not disguise the fact he must feel deeply chastened about the way it has unravelled. “I didn’t want to stay,” he said. “And I guess they could say they didn’t want me to stay anyway.”

Mutual consent or mutual contempt? All that can be said with certainty is that his team were generous opponents for a team with Newcastle’s needs. John Carver’s side have been English football’s Slapstick XI over the last few months. Yet they could not have picked a better side to play than West Ham. The home players held their nerve, dealt with the different emotions and pressures and it was strange, ultimately, that a day that had been preceded by much tension, with the heavy threat of relegation and potential devastation, became a relatively stress-free occasion.

Newcastle would have been spared anyway because of Hull’s inability to beat Manchester United but Carver and his players have waited a long time to experience the explosion of joy that came at the end and, if nothing else, they deserved the crowd’s acclaim for dispelling the theory that it would be them who meekly waved a white flag. Yes, it was true that Allardyce’s players had sleepwalked through Allardyce’s final game. Yet Newcastle did play with a sense of togetherness that has not always been there in the Carver era and, in the process, they brought to an end a wretched run of only one point out of the previous ten games.

There was also a charming subplot attached to their day because of Jonás Gutiérrez’s contribution. Gutiérrez did not finish his chemotherapy for testicular cancer until November and the goal that extinguished any lingering relegation fears was his first since receiving the all-clear to resume his career. This was his last appearance for Newcastle because they have decided not to offer him a new contract now Mike Ashley is promising big-money arrivals to get the club – no sniggering, please – into the Champions League. For Gutiérrez, that late, deflected shot was some way to go and, for Newcastle, his victory run will be remembered as one of the most joyous moments of an otherwise bleak season.

It would be wrong, though, to say his goal was the all-important moment. Moussa Sissoko had put Newcastle ahead with a towering header nine minutes into the second half and there was never really any moment after that when West Ham seriously threatened to turn the game in their favour. Sissoko had shown considerably more determination than either Winston Reid or Aaron Cresswell to power in Gutiérrez’s left-wing cross and, as a snapshot of the game, that told a pretty accurate story.

Stewart Downing at least carried a flicker of menace during a prosaic opening half but Allardyce’s men have been in relegation form since Christmas and looked like a team in a hurry to reach their summer, officially. It was difficult to remember a more ineffectual strike partnership in the top division than Carlton Cole and Enner Valencia while, at the back, Cresswell seemed to have temporarily forgotten he was apparently West Ham’s player of the year.

Carver was close to tears afterwards in what strayed towards an Oscars-style thank you speech and his personal sense of relief must have been immense given his long association with the club and all the disparagement that has come his way. Carver had instructed his players not to read the sports pages or tune into the football shows during the long buildup to this match because he feared they might be suffocated in anxiety.

When the game started, it was also noticeable that he seldom left his dugout. The idea, again, was to spread a message of calm – or as near to it as possible – and it worked. Newcastle have rarely looked as composed under his brief tenure and could also look back on an extraordinary moment when Vurnon Anita and three of his team-mates ran from their own half in a four-on-one break. Anita’s attempt to lay the ball off was intercepted by the West Ham goalkeeper, Adrián, but Gutiérrez’s goal quickly followed and Newcastle were safe.