‘Every player has a price,’ says Manchester United boss, as Mkhitaryan on shaky ground 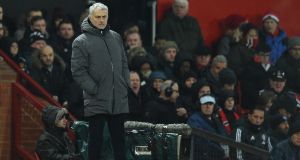 Manchester United boss Jose Mourinho has paved the way for departures next month, stating “every player has a price”.

Henrikh Mkhitaryan appears to be on the most precarious ground, with the Armenian not even making the matchday squad for the past five fixtures, and United continually linked to attacking talent including Arsenal’s Mesut Özil and Atletico Madrid’s Antoine Griezmann.

If he continues to play such a peripheral role, United would surely consider offers for a player who cost up to £30million 18 months ago.

“I think for the right price,” Mourinho said of potential outgoings in the transfer window. “That’s my approach as a manager. I think every player has a price.

“If a player is not happy, if a player brings with him the request with the number that we consider a good number for us – like with Memphis and Morgan – I would never say no.”

England left-back Luke Shaw is another who has struggled for game time this year, and does not lack admirers, and although Marouane Fellaini’s contract is winding down, any exit would appear more likely next summer.

As for new arrivals, Mourinho has hinted he would only be interested in a major acquisition.

“I’m not a big defender of the January market but there are players and situations that sometimes you have the chance to do and you shouldn’t lose that chance,” he said.

“I don’t like the January market just to buy, but if you can buy in January a player that you would buy in June or July and you have the chance to get him a few months before, then great.”

One player who might fit that description is Griezmann, who has long been linked with the Red Devils.

His departure from Atletico Madrid appeared to move a step closer on Friday with manager Diego Simeone telling L’Equipe “of course he can leave at some point” and recognising the player’s need to “grow”.

But if Mourinho is eyeing an imminent move for one of European football’s most coveted talents, he is keeping his cards close to his chest.

“I don’t speak about players, especially players that belong to other clubs – there is no sense,” he said.

United will be without defender Eric Bailly for up to three months after he was sent for an ankle operation.

The 23-year-old has not played since lining up against Chelsea on November 5th, and any hopes of a swift return have now evaporated.

Speaking to MUTV ahead of Sunday’s trip to West Brom, Mourinho said: “He goes to surgery, the decision is made. I don’t say [he’s out] for the rest of the season but it’s for the next two or three months.” – PA