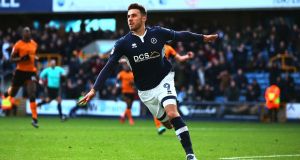 Wolves extended their lead at the top of the Sky Bet Championship table to eight points after Cardiff failed to capitalise on their 2-2 draw at Millwall.

Nuno Espirito Santo’s league leaders were forced to settle for a point at The Den as Millwall defender Jake Cooper headed home a second-half equaliser in a pulsating clash.

Lee Gregory had put the Lions in front in the 17th minute but Diogo Jota levelled and Romain Saiss then handed the visitors the lead after 56 minutes.

Despite the slip-up in the early kick-off, Wolves still increased their unbeaten run to 10 games and the point proved to be valuable due to Cardiff’s 4-2 defeat at home to Fulham.

Tim Ream and Floyd Ayite had the Cottagers 2-0 up after 56 minutes before a stunning strike from Kenneth Zohore reduced the deficit at the Cardiff City Stadium.

Ryan Sessegnon made it 3-1 in the 78th minute and Stefan Johansen capped the victory after Callum Paterson’s header in added time briefly gave the Bluebirds hope.

Bristol City moved above Cardiff on goal difference and into the automatic promotion places after a 2-0 win over Reading at Ashton Gate.

Substitute Jamie Paterson curled in a stunning effort in the 68th minute before being replaced by Lloyd Kelly, who sealed the points in added time to extend City’s unbeaten run to seven games in all competitions.

Birmingham remain rooted to the foot of the table, three points adrift of safety, after a 2-0 defeat at home to Norwich.

Alex Pritchard gave the Canaries the lead in the 33rd minute and Josh Murphy secured victory with 19 minutes remaining.

Tony Pulis watched on from the stands as Middlesbrough beat second-bottom Bolton 2-0 in the first game since Garry Monk’s departure.

Former West Brom chief Pulis was appointed as Boro’s new boss earlier on St Stephen’s Day but the side was taken by caretaker manager Craig Liddle.

Martin Braithwaite put the hosts in front with a deflected shot in the 48th minute and Britt Assombalonga swept home a second nine minutes later.

Sheffield United claimed their first win in seven games while Sunderland remain in the relegation zone following a 3-0 defeat at Bramall Lane.

John Lundstram opened the scoring after 36 minutes while Richard Stearman and George Baldock added quickfire second-half efforts to keep the Blades in the play-off places.

Leeds came from behind to beat Burton 2-1 and extend their winning run to four games.

Tom Naylor swept home the opener for Burton at the back post following Lucas Akins’ low cross on the half-hour mark.

Pablo Hernandez levelled for Leeds with a 61st-minute free-kick and Kemar Roofe fired home from the edge of the box three minutes later to turn the game on its head.

Sheffield Wednesday began life without Carlos Carvalhal with a 3-0 victory at Nottingham Forest.

A fantastic strike from Adam Reach opened the scoring in the fifth minute before Jordan Rhodes added a penalty and Lucas Joao notched a neat third after 65 minutes.

QPR midfielder Josh Scowen was sent off in the 0-0 stalemate at Ipswich while Barnsley and Hull also played out goalless draws against Preston and Derby respectively.

1 Cheltenham faces criticism after racegoers suffer Covid-19 symptoms
2 Pelé’s personal keepsakes to go under the hammer
3 Ian O’Riordan: Learning to run for the first time all over again
4 Golfer below par after licking ball
Real news has value SUBSCRIBE