Frank Lampard says Chelsea players are too quiet on the pitch 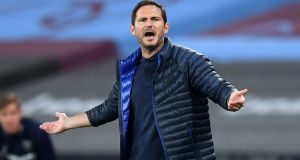 Frank Lampard has admitted Chelsea’s players are too quiet on the pitch and has warned that their attitude has to improve with hopes of Champions League qualification on the line.

Lampard was livid after Chelsea’s 3-0 defeat to Sheffield United on Saturday and, with fifth place in the Premier League no longer gaining entry to the Champions League next season following Manchester City’s successful appeal against their European ban, he wants a reaction when Norwich visit Stamford Bridge on Tuesday night.

The 42-year-old manager feels the problems were more mental than tactical against Chris Wilder’s side and, having said he could “only hear Sheffield United voices” during the setback at Bramall Lane, he built on that criticism by suggesting his side’s lack of character was not a one-off.

“It’s something I picked up before, something I talk about with the players and one of the easiest things to do on the pitch – to help your team-mates by being vocal,” Lampard said.

“We don’t have enough of it, for sure. We have to get better and it’s something I drill into the players, particularly now where you can hear it because the stadiums feel different.

“You can be as quiet as you want off the pitch – we have some quiet players who keep themselves to themselves – but they must come out of that on the pitch. They must demand the ball, otherwise the game can pass you by.

“They must have character to talk to people around them . . . Maybe as the players grow into themselves a little bit, I keep telling them, the staff keep telling them, hopefully that message will hit home. But sometimes it’s not that easy when players are generally quiet.”

Chelsea visit Liverpool on Wednesday week and host Wolves on the final day. “I do expect a reaction,” Lampard said. “There are two types of defeat. There’s a defeat against West Ham where it’s a game we dominate but make mistakes [in] and it’s a game I feel we really should win; then Sheffield United, where they were better than us.

“The important thing now is how we react and I expect that from the players tomorrow. There will be big personalities in the team tomorrow. They need to stand up. It cannot be understated how big mentality is. It is very easy to look at talent but you also have to look at attitude within the team.

“It’s something we can improve. Younger players can be more vocal. Older players can take on responsibility of helping that. We’re in a good place but it can improve. Critical times like now, where there’s a lot on the line, it’s time for people to make that improvement.”

Chelsea have conceded 49 goals, more than any other team in the top half, and Lampard admitted he was still searching for a settled centre-back pairing. “There is a way I want us to play and it’s not gung-ho. A lot of the goals are balls that come into our box that maybe we don’t defend right and I feel I know the answers to it. I hate conceding goals.”

Lampard, who said he learnt a lot about his players at Bramall Lane, pointed the finger at his squad after being asked whether he had discovered anything about himself.

“I learn from every game and when you take a defeat it’s a different type of learning. But I was talking about the players the other day. The defining factor was not the tactics, it was the intensity of the game.

“When you talk about bravery people think that’s flying into a tackle. No, bravery is receiving the ball and when you have space to turn and play forward, you play forward because you believe in yourself. Those are the basics that I felt were short.” – Guardian