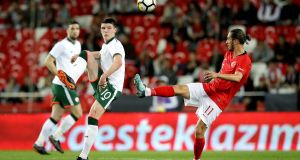 Declan Rice in action against Turkey’s Yusuf Yazici during the friendly international at the Antalya Stadyumu. Photograph: Ryan Byrne/Inpho

There was a time when the Turks were seen as something of a soft touch for an Irish team but it is a while since one has beaten them and here the intention was to use them as a sounding board for Martin O’Neill’s notion of what his reworked side might look like.

It would be too much to say that after this it’s a case of heading back to the drawing board but if, as the manager suggested, it was the start of a process, then a fair bit of work remains to be done in the games against France and the USA.

The scale of the upheaval in stage one was substantial enough. Four of the outfield players were getting their first senior starts, two making their debut and O’Neill opted for wing backs while going all-in on a new-look strikeforce.

Not all of it worked out as he would have been hoping – not the goalscoring side anyway – with Ireland barely posing a threat against a side who, for all the visitors’ reliance, might feel they should have had another one or two.

Though the shape was changed, the failings were much the same as ever. Ireland gave the ball away too easily, resorted to long balls too quickly and routinely worked the ball back to their goalkeeper who then hoofed it upfield. Anyone hoping for a brave new dawn can continue the vigil.

There were positives, mainly in the form of Declan Rice, who looked pretty composed under some pressure in defence, then cool as you like over the last 20 minutes when he had been shifted forward into midfield. His invention, on occasion, brought the attacking side of Ireland’s game to life and he showed the confidence too to try a volley late on when others in his place would have preferred to play it safe.

The central midfield trio of Conor Hourihane, Alan Browne and Jeff Hendrick also had the odd moment between them but there problems too and the change of tactical approach often seemed to emphasise them.

James McClean, for a start, did little here to suggest he should have a long-term future as a wing back. Freed, late on, to press forward, the Derryman looked a little more like himself, but defensively, before that, he had looked to be living a little too close to the edge.

He was, of course, supposed to contribute to the attacking side of things throughout but having completely squandered possession on a handful of occasions, he made his first real run in the 36th minute; a move that ultimately involved Séamus Coleman too and resulted in Ireland’s only free of the first 45 minutes from a potentially dangerous area.

From Hourihane’s kick, McClean’s flicked backward header was straight at the Turkish goalkeeper but, if you care to count it, it was Ireland’s only attempt on target over the course of the 90 minutes.

The energy of the two new strikers was supposed to equip O’Neill’s side to pose much more of a threat but without the width the wing backs were intended to provide, Seani Maguire and the day’s other original debutant Scott Hogan, spent their time looking for the ball with their backs to goal and much bigger defenders breathing down their necks. For the most part, it didn’t end well with Hogan peripheral for long periods and Maguire brushed aside too easily. His highlight was a so-so penalty claim before he became one of the first two players to be replaced in the second half.

The exceptional attacking moment through the opening period was when Hendrick was gifted possession in midfield by a Yusuf Yazici mistake and played a wonderful low through ball for the Aston Villa striker to run on to. Hogan had the composure to go around the oncoming Turkish goalkeeper Volkan Babacan but not to accurately judge the weight of the ball with which he did it and in the end he couldn’t quite squeeze his shot in from the angle he left himself.

The logic, in any case, of starting with the two strikers had been apparent beforehand but in a team playing so deep for such long spells, its major effect seemed to seem to leave Ireland slightly shorthanded as, once again, they dug in on the edge of their own area.

The Turks seemed happy, for the most part, to shoot from there and while Duffy intervened to prevent a couple of efforts reaching him, Colin Doyle did well enough in this, his first senior appearance in just short of 11 years, to keep their long-range attempts out.

Not for the first time, though, a short corner proved to be Ireland’s undoing and after Hakan Calhanoglu fed the unmarked Yazici out on the left McClean looked to have lost his man as Mehmet Topal stepped forward to sidefoot the cross home from 10 yards or so.

If there was an upside to the setback, Ireland now at least looked a little more focused going forward as they started to chase the game and O’Neill gradually shook things up a little with Matt Doherty getting on for his debut, Ciaran Clark’s introduction facilitating Rice’s move into central midfield and Daryl Horgan bringing an added sense of urgency to the proceedings.

There were even a couple of half chances for the Irish late on but the Turks, to be fair, went largely untroubled to the end. O’Neill might, for all of that, prefer to talk about progress having been made but the process of this Irish team’s renewal is, it seems, still only in its infancy.

1 The Game Changers: Vincent O’Brien, a pioneer who took Irish racing to the world
2 The unsolved mystery of Goran Ivanisevic’s stunning Wimbledon win
3 Tipping Point: DeChambeau’s transformation raises questions, but who will ask them?
4 John O’Sullivan: IRFU must recognise vital role of clubs in rugby's return
5 Dan Carter to return to Christchurch as an Auckland Blues player
Real news has value SUBSCRIBE
Crossword Get access to over 6,000 interactive crosswords