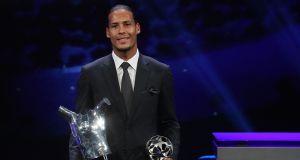 Liverpool defender Virgil van Dijk has been named as Uefa’s Men’s Player of the Year with the 28-year-old coming comfortably first in the vote by journalists and coaches from across Europe ahead of arch rivals Lionel Messi and Cristiano Ronaldo.

The pair have five wins between them and the fact that Messi was beaten into second place after a season in which he scored 36 goals in 34 La Liga games and 12 in 10 in the Champions League for Barcelona says something about the performances of the Dutchman at the heart of the Liverpool defence.

The former Celtic and Southampton defender had an absolutely outstanding season, playing in all 38 Premier League games, scoring four times, as Liverpool lost out narrowly to Manchester City. he also scored two goals in 12 appearances as the Merseyside club won another European crown. Predictably, though, it was all the clean sheets, including the one earned against Tottenham in the Champions League final that he reflected upon with the greatest pride after receiving his award in Monaco.

“I’ve been a defender since I was very young,” he said. “That has been my passion since I was young. I like clean sheets. I like it when strikers, especially good strikers, don’t score against you and so, everyone has their passion and for me it’s definitely to prevent goals along with the other defenders and the goalie. Last year was outstanding for all of us.

Ronaldo: "We've not had dinner together yet, but I hope in the future!" 😃@Cristiano & Messi at the #UCLdraw 🤜🤛 pic.twitter.com/KOFY8680tU

“I’m very proud that this year I have the honour of getting this award,” he continued. “I’m very grateful that more of the voters voted for me instead of two world class players who have been doing it for years. It’s all about opinions, of course, but I think people feel it’s right that over the last couple of years defenders get a little bit more recognition.”

Van Dijk says that retaining the European title was a key objective for him and his Liverpool team-mates during the coming months.

“There are so many challenges this year that the team and the club wants to achieve [but] we want to defend our Champions League trophy. We want to win the title again and in the league we want to come as close or do even better than Manchester City.”

Uefa’s Player of the Year Award is voted on by 55 representatives of media organisations from across Europe (including The Irish Times) as well as 80 coaches of clubs from the group stages of the previous season’s two main European club competitions. A player’s performances in games for both their club and country is taken into account.

Van Dijk won with 305 votes ahead of Messi with 207 and Ronaldo with 74. England international Lucy Bronze, also a defender, won the women’s award ahead of Lyon team-mates Ada Hegerberg and Amandine Henry. The former Sunderland, Liverpool and Manchester City star got 88 votes compared to 56 and 44 respectively for her two rivals.

1 Waterford turn Kilkenny upside down and inside out
2 Jim McGuinness: There is a way to save championship and make it competitive
3 Waterford’s frenzied waves of attacks too much for Kilkenny
4 Sordid murder of hurling brothers still resonates in south Galway
5 Once in a blue moon: Cavan’s overnight success 15 years in the making
Real news has value SUBSCRIBE
Crossword Get access to over 6,000 interactive crosswords