West Ham go ahead late on thanks to Austrian’s double, before controversial equalise 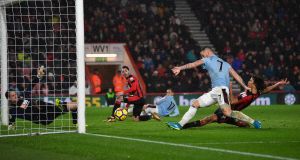 The image of a drenched David Moyes at the end of this madcap affair between two teams bereft of any defensive dignity only begins to tell the story. This was a topsy-turvy tale of how West Ham United fought from behind to lead with six minutes of injury time to play, only for Nathan Aké to wheel away for the second time on a bonkers afternoon as Bournemouth ensured both sides took home a point – one that in truth does little for either side.

Marko Arnautovic looked to have sealed victory after poking home from close range, shortly after he seized on Asmir Begovic’s costly slip to equalise nine minutes from time. But after Aké headed into the net via the faintest of touches from Callum Wilson – and after a conversation between referee Bobby Madley and his assistant Simon Long – Bournemouth were out of jail. West Ham will complain long and hard, though, as Wilson appeared to be offside with the ball coming off his arm.

James Collins had headed West Ham in front before goals from Dan Gosling and Aké left Moyes’s side with it all to do. They roused; Begovic capsized while talking a goal-kick to allow Arnautovic in before the Austrian added a fifth in five starts to make it 3-2. That, though, was far from the end of it.

The opener, after seven minutes, was meat and drink for Collins, the West Ham captain making only his fifth league start this term. He needed no second invitation to head home at the front post from Aaron Cresswell’s inswinging corner after losing his marker, Simon Francis, and then brushing aside Dan Gosling midair. Collins had made the desired impact on his return to the Moyes’s side, while Manuel Lanzini was also busy, back in the starting lineup, after serving a two-match ban.

Francis, the Bournemouth captain, twice headed wide for the hosts before Joshua King squandered the most inviting of chances, prodding wide after Callum Wilson sent Angelo Ogbonna slipping and sliding down the right flank before teeing up his strike partner.

West Ham could only survive for so long, though. When Collins’s clearance from Ryan Fraser’s free-kick fell at the feet of Gosling – via a hybrid of Aké and King – with plenty of room to manoeuvre but the Bournemouth midfielder hammered his effort hard and low beyond an exposed Adrián.

It had been a long time coming and West Ham were at sixes and sevens for the rest of a frenetic first half. Arnautovic, who led the line wearing a No7 shirt with his name misspelt – “Arnoutovic” – had a little to shout about but did supply Lanzini, who should have done better on the edge of the box.

Bournemouth were fortunate to head down the tunnel with 10 men with Bobby Madley, the referee, kind to Francis, the Bournemouth captain, for a high boot on Chiekhou Kouyaté. The West Ham midfielder stayed grounded for three minutes, during which time an incensed Stuart Pearce was among those from the away dugout to make his voice heard to the fourth official, Mike Jones.

After the interval, Wilson hit the side netting for Bournemouth before Lanzini’s effort bobbled wide with the help of Lewis Cook’s last-ditch sliding intervention. With the hour mark approaching, Cook was instrumental at the other end after sending the ball into the box from Fraser’s quick free-kick. Gosling got the faintest of touches to keep the ball alive before Aké did the rest, smashing home from close range. Moyes immediately readied Andy Carroll.

The West Ham striker made an instant impact, flicking on for his fellow substitute Javier Hernández, but the ball ran free. Then, with 20 minutes to play, Arnautovic – his shirt now changed – shot painfully wide of goal after Carroll and Hernández again combined. By the time Moyes made his final change 12 minutes from time, Bournemouth would have been home and dry but for Adrian’s superb stop from Benik Afobe.

Graham Burke’s strike from halfway caps Shamrock Rovers’ fine night out 22:08
Lions squad set to have a greater spread than four years ago 22:00
Warren Gatland hopeful that Lions itinerary will be finalised this week 22:00
Blackmore back among the winners at Fairyhouse 22:00
Elite athletes still required to undergo 10-day mandatory quarantine 20:32