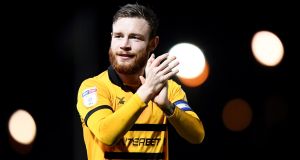 Rodney Parade has, as Mark O’Brien can vouch, been home to some of the biggest giantkillings in recent years but when Newcastle visit in the Carabao Cup on Wednesday, he will be rooting for Newport County from the stands, commentating rather than influencing events as captain.

He retired aged 27 in June and, a month later, underwent open-heart surgery for a second time to solve a leaking valve. “I’ve been through hell and back for 10 years,” O’Brien says. “Each year I used to have to get a heart scan to make sure I’d be allowed to play the following season but nobody really knew that. I didn’t want to be a pity story. ‘Let’s all take it easy on him.’”

Aged 16, having made his Championship debut for Derby, O’Brien had a pigskin valve inserted in his heart and doctors told him the best-case scenario would be it lasted for five years, warning it could fail and he would never play professionally again. As it happens he made more than 200 career appearances. “I had my mind set on taking that slight chance and I’m glad I did. People say, ‘It’s such a shame you had to retire at such a young age’ but in my head I was retiring five years ago. I’m lucky.”

Not that he knew a League Two defeat at Leyton Orient in January would be goodbye. A ligament injury and a fractured elbow put paid to the rest of his season but palpitations during lockdown led to a trip to a cardiologist and another seven-hour operation at Glenfield hospital in Leicester, this time to fit a mechanical valve.

“The recovery is the hardest part. You are starting like a baby, crawling before you can walk. You have to learn to walk again, learn how to jog again and your fitness is knocked back to ground zero. Your sternum gets cut open and that takes up to 12 weeks to heal before you can sleep on your side. I would walk up a flight of stairs to my apartment and by the time I’d get to the top I’d have to go and lie down because I’d be so tired.”

O’Brien treasures an unlikely career and speaks with candour and a telling sense of perspective, even if it has not always been this easy. He has come to terms with having to take a blood thinner for the rest of his life but there have been panic and anxiety attacks, including one that put him in hospital.

“I remember breaking down, being in tears and saying: ‘This is all too difficult for me, this is so much more than I’ll be able to handle.’ I used to think: ‘There’s no point in me coming out of hospital because I don’t know what I am going to do with my life.’ Mentally, this part of the whole rehab is a lot tougher because there has been a lot more taken away from me this time.”

The toughest thing has been losing that raison d’etre but O’Brien is looking forward rather than wallowing in the “what ifs”. “I’ve realised I’m not going to be 100 per cent right now and yes, I will have ups and downs, but as the weeks have gone on I’m learning to manage those and keep myself that bit busier. My purpose was ‘I’m a footballer and that’s it’. Now I need to find a new purpose. Thinking of the future helps but there have been times when I can’t even see past my nose and I’d think: ‘I should be out there training now.’”

These days O’Brien spends a couple of days a week poring over match clips, working with Jason Windsor, the head performance analyst, in the “war room”, an office at the training ground where they plot how to conquer opposition and pinpoint where Newport, who knocked out Swansea and Watford in the previous rounds, can exploit teams. O’Brien helps out on a voluntary basis after Wayne Hatswell, the Newport assistant manager who video-called him “most days” while he was in hospital, invited him to stay involved.

“It has helped bring me out of my shell a bit more – I’m still half in it now trying to come out of it – but it’s great to still feel part of something. I’d only ever been on the receiving end of when all that work goes on, seeing the end product in a team meeting, but now I’m trying to learn, looking at it from a coach’s side as well as a player’s perspective to give a different twist on it.”

O’Brien insists Newport can “cause Newcastle problems” and Michael Flynn’s side have form for upsetting the odds; they miraculously escaped relegation to non-league on the final day of the 2016-17 season, when O’Brien’s goal saved their skin, the team having been 11 points adrift two months earlier, and last year he led Newport out against Manchester City in the FA Cup fifth round after overcoming Leicester and Middlesbrough.

A year earlier they embarrassed Leeds before taking Tottenham to a fourth-round replay. “Teams have started bringing stronger and stronger teams because they know if they don’t bring a strong enough squad, they’re going to be in for a possible upset. Man City didn’t take any chances and went near on full strength. Leicester went strong when they came down and I think Newcastle will do the same.”

Mementos from those matches hang in O’Brien’s wardrobe after he swapped shirts with Pablo Zabaleta, Bernardo Silva and Dele Alli and he hopes to add Jeff Hendrick’s Newcastle shirt to the collection. “We have known each other since we were about 10-years-old,” says the Dubliner who, on home matchdays, turns commentator for the club feed.

He continues to consider his next steps and stresses the continued support of the club doctor, Daniel Vaughan – “the most reassuring person ever” – has been priceless in allaying any fears over niggling aches or pains. As for how he expects to feel come kick-off on Wednesday, O’Brien’s reply is heartening.

“In the strangest way possible, I’ll be jealous of everyone who gets to play and, if they do get the win, the buzz you get, but I’m not gutted about anything because this is a decision that has been in my head for the last 10 years of my life,” he says.

“Each year I gave it my all because I never knew if it was going to be my last. To still be around it is a big enough achievement for me.” - Guardian