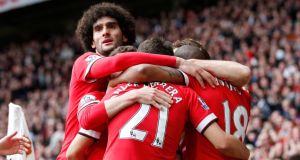 Manchester United temporarily climbed above their ‘noisy neighbours’ into third position thanks to a 3-1 win over Aston Villa which included a stunning strike from Wayne Rooney.

Ander Herrera’s first-half goal put United in front before Rooney doubled the hosts’ lead with a contender for goal of the month, if not the season.

Christian Benteke pulled one back for Aston Villa but Herrera scored again late on to give United three vital points ahead of next week’s Manchester derby.

United endured some nervy moments in the final 20 minutes, but they rarely looked like failing to register their fifth straight Barclays Premier League win.

Ashley Young starred against his old club and Herrera rounded off a brilliant display with his sixth and seventh goals of the season.

The best goal of the afternoon undoubtedly belonged to Rooney.

The United captain touched down substitute Angel di Maria’s cross with his left foot, and then made a sharp turn before smashing the ball home first time with his right.

It was his 14th — and best — goal of the season for the club. Its importance cannot be under-estimated either.

The victory means United moved ahead of Manchester City, with a game in hand, into third in the Barclays Premier League.

City were level on points with leaders Chelsea at the turn of the year, but now they down in fourth position, one point behind United ahead of their match at Crystal Palace on Monday.

They may find the going hard coming to Old Trafford for the Manchester derby next Sunday in the knowledge that the hosts are in such good form.

United’s Champions League place looked in jeopardy just a few weeks ago, but with Liverpool losing 4-1 at Arsenal on Saturday lunchtime, Louis van Gaal’s men are now some eight points clear of the Reds with seven matches left.

Villa, on the other hand, will be concerned about their plight. Tim Sherwood’s men will drop to fourth from bottom if Sunderland beat Newcastle on Sunday.

Villa’s record at Old Trafford suggested they were in for a tough afternoon.

They had won just once here since 1983. That victory came six years ago when Gabriel Agbonlahor headed the winner to send Villa third in the table.

Times have changed since then, though. Four managers have walked through the exit door at Villa Park and the club have plummeted to the brink of the relegation zone.

Sherwood has enjoyed something of a love in with Villa supporters since his appointment on Valentine’s Day.

The Villa boss won four of his seven matches prior to kick-off, but on Saturday he came up against one of the form teams in the league and United looked to find an early goal as they had done against Tottenham and Liverpool.

They thought they should have had a penalty in the sixth minute when Rooney tumbled to the turf after being pulled back by Ciaran Clark, but referee Roger East waved play on.

Rooney raged at the official, who controversially sent off Wes Brown instead of John O’Shea during Sunderland’s defeat at Old Trafford in February.

Villa hit back on the break, but Agbonlahor could not finish despite a mix-up between Phil Jones and De Gea.

It was to be Villa’s only chance of the first half as United launched attack after attack.

Young, his every touch booed by the away fans, bamboozled Alan Hutton for the first of many times, but Juan Mata could not finish the pull back from the former Villa winger.

It was Villa’s turn to feel aggrieved with the referee as Antonio Valencia somehow avoided a booking for sliding in on Fabian Delph.

Then, one minute from the break, United took the lead they deserved.

Young slipped the ball to Blind and he squared to Herrera, who took one touch before drilling a low half-volley past Guzan.

Hutton, who required treatment just before the break, was replaced at half-time by Leandro Bacuna.

Young gave Okore the same treatment as Hutton, bursting past the defender before curling a low shot just wide of the diving Guzan.

The American then did well to tip Marouane Fellaini’s header over on the hour.

Young received a standing ovation when he was replaced by Di Maria in the 70th minute.

Nine minutes after his introduction, the Argentinian fired over a low cross which Rooney touched down with his left foot and then swivelled to drive the ball past Guzan with his right.

The celebrations were cut short when Benteke’s shot slid in under De Gea to pull one back for Villa, but Herrera made sure of the win in injury time.

Rooney won the ball and laid the ball off to Mata, who teed up his compatriot and he did the rest from 18 yards.