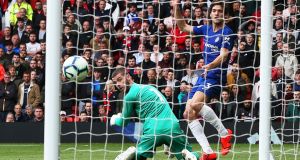 This draw frustrates Manchester United and cheers Chelsea who after Arsenal’s capitulation at Leicester City earlier on Sunday now have a Champions League berth in their control.

David de Gea was again the villain for United, his mistake from Antonio Rüdiger’s speculative 30-yard shot handing Marcos Alonso the first-half equaliser – after Juan Mata’s earlier strike – that gained Chelsea what may prove a precious point. It takes Maurizio Sarri’s team to 68 points, two ahead of Arsenal after their 3-0 loss, and three ahead of United, with all three sides having two matches left.

De Gea’s howler punctured United, who had been ascendant before the break, and was the latest in a series that have cost Ole Gunnar Solskjær’s side goals and points. The manager now has a decision to make regarding whether he should drop the goalkeeper, who may benefit from having to take stock of why his form has nosedived so dramatically recently.

Eden Hazard, who had a quiet afternoon, said: “A good day but could be better. We came here thinking about winning the game, a draw is not a bad result. We now have two games and we will try and be in the top four.”

Solskjær made five changes from the derby defeat to Manchester City, removing Fred, Chris Smalling, Jesse Lingard, Andreas Pereira, and Matteo Darmian. While the latter two were replacements, and Smalling and Lingard injured, it was unclear why Fred was absent. In came Mata, Romelu Lukaku, Ander Herrera, Nemanja Matic and Eric Bailly, the latter’s inclusion of particular interest as his last league start was at Leicester City on February 3rd.

If Hazard shines Chelsea tend to and it was the Belgian’s early cross – aimed at N’Golo Kanté – that offered a first warning. Luke Shaw provided his side’s riposte, a long ball allowing Lukaku a run at Kepa Arrizabalaga but he dawdled and the danger died.

The next time United attacked they scored via a slick move. Shaw hit Paul Pogba who found Lukaku who sent the left-back darting in behind Chelsea. When he turned the ball in Mata beat Arrizabalaga with a right-foot finish.

This was United’s first goal from open play in 541 minutes: since Scott McTominay’s strike in the 2-1 loss at Wolverhampton Wanderers on April 2nd, illustrating why Solskjær’s team entered the contest having won only twice in their previous nine outings. And the quality of the sequence that undid Chelsea made the run of form more puzzling.

After the opener, the visitors had a free-kick and two corners in succession but did not ask De Gea to show his recent shakiness was behind him. Yet a Shaw header that handed Gonzalo Higuain a chance to shoot was hardly reassuring and he was grateful the No 9 failed to capitalise.

The game was being played at an attractive pace, each team contributing. Hazard out-manoeuvred Matic and hit a ball into the area United scrambled away and suddenly Lukaku was bursting down the right and finding Marcus Rashford. A corner was claimed and Bailly’s head met Ashley Young’s corner as he came close to doubling the lead.

Pogba was having a first half when he looks the leader of this team, popping up everywhere, driving at Chelsea, generally proving a nightmare to contain. This was mirrored by Lukaku, Herrera and Mata, in particular: a trio whose speed of thought and execution was helping United dominate.

When Young pinged in a free-kick from the left that, again, had Chelsea concerned United seemed to be sailing into a half-time lead. But, now, disaster struck and this was down to De Gea.

Rüdiger struck a shot from 30 yards straight down the goalkeeper’s throat. It should have been a regulation save yet somehow he spilled it and there was Alonso to grab an equaliser that went in off the left post. De Gea’s other recent errors include culpability for both of City’s finishes in the defeat here on Wednesday plus the one that allowed Lionel Messi’s second in the 3-0 loss at Barcelona two weeks ago.

Sarri’s talk at the interval may have featured an order to pepper De Gea whenever possible; Solskjær’s might have reminded his outfield players of how dominant they had been.

A Rashford 20-yard free-kick that was gathered safely by Arrizabalaga was the second half’s first action. From here the sides traded blows though these were jabs rather than anything that stung. On 65 minutes Alexis Sánchez replaced the misfiring Rashford and Rüdiger hobbled off for Christensen. This caused a break-up of rhythm which continued when Bailly had to be helped off with what appeared a knee injury.

When play restarted United tried in vain to force the winner. Even in seven minutes of added time Solskjaer’s men failed to find the breakthrough: Rojo’s header being cleared off the line by Pedro as the game petered out. – Guardian