Scott Hogan nets as Sheffield United all but confirm promotion 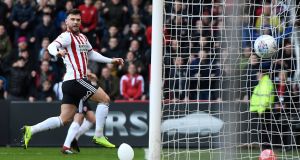 Goals from Scott Hogan and Jack O’Connell gave Sheffield United a 2-0 victory over Ipswich which leaves them on the brink of promotion to the Premier League.

With Leeds playing Aston Villa tomorrow, the automatic promotion places have yet to be finalised but barring a sizeable swing, United’s superior goal difference looks certain to see them secure a return to the top flight for the first time since 2007.

United boss Chris Wilder made one change to his starting line-up with Chris Basham returning in place of Martin Cranie. Billy Sharp returned the substitutes’ bench after recovering from injury.

The hosts started brightly and David McGoldrick just failed to connect with a Basham cross in the third minute.

Ipswich boss Paul Lambert was forced to make an early change when Will Keane went off injured, with Trevoh Chalobah coming on in his place.

Hogan opened the scoring in the 24th minute with a deft touch from O’Connell’s ball in to ease the tension among the home supporters.

Norwood went close to extending United’s lead three minutes after the break when his angled free-kick struck the far post.

Norwood then turned provider, sending over a perfect cross from the right which was met by McGoldrick but the ex-Ipswich striker headed into the side netting — prompting a section of home fans to celebrate, thinking it had gone the other side of the post.

Top scorer Sharp received a tremendous reception when he was sent on as a replacement for Hogan in the 63rd minute. He was soon involved, threatening to go through on goal before Skuse stopped him with a timely interception.

John Egan headed over from a Norwood corner before United extended their lead.

The goal came in the 71st minute when Fleck’s corner was met by a close-range header from O’Connell, sparking joyous scenes among the home support.

Ipswich never threatened to make a game of it, with the home side content to keep possession for large parts of the time remaining.

Alan Judge did put a good effort on target towards the end of the match but his long-range shot was turned over the bar by keeper Dean Henderson, who was otherwise largely a spectator.

The final whistle was greeted with a thunderous roar from the 30,000-plus crowd and despite the club’s appeals to keep the pitch clear, a small number of fans did enter the field of play.