Mahrez runs the show as Jamie Vardy wins it for Leicester 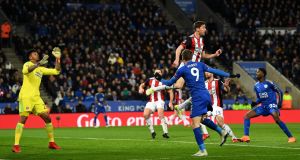 If Pep Guardiola needed any more convincing that Riyad Mahrez can add to his already star-studded Manchester City squad next season then the Algerian’s performance on his first start since his failed move to the Etihad Stadium would surely have done enough.

The 2015/16 PFA Player of the Year ran the show from start to finish against Sheffield United, providing the assist for Jamie Vardy’s winning goal in the second half as Leicester reached the sixth round of the FA Cup for the first time since 2011.

On this evidence, with Mahrez and Vardy linking up in a manner that was at times reminiscent of their title-winning season, there is every chance they could win the competition for the first time in their history. Of course with several big names still involved, Claude Puel will not be looking that far ahead just yet, although with European qualification unlikely to happen via the Premier League, this does represent their best opportunity to return to something close to the elite level of competition they tasted last year.

Manchester City’s attempt to sign Mahrez on the final day of the transfer window angered the usually mild-mannered Puel to such an extent that he accused the Premier League leaders of showing a lack of respect earlier this week. City insist that they first approached Leicester a whole week before the end of January but the episode has undoubtedly been a distraction to the French manager and his players.

Last week’s 5-1 hammering against City in which Mahrez came on as a second half substitute followed the home draw with Swansea and defeat at Everton, meaning Leicester hadn’t tasted victory since thrashing Peterborough in the previous round of this competition.

The announcement of the Algerian’s name before kickoff was greeted with a smattering of boos, although the response from a depleted home crowd was generally supportive.

Their opponents also made six changes from their last league outing, with Chris Wilder perhaps mindful of the three crucial Championship fixtures in the space of seven days coming up next week.

The Blades have lost their way in recent months following a blistering start to the season and now sit three points behind the play-off places. Setting out with a rigid five-man defence was an indication that they were here to contain their opponents for as long as possible.

With Mahrez causing problems from his starting position on the right flank, they just about did enough to keep the scores level in the first half. Jamie Vardy’s effort from Wilfred Ndidi’s precise through ball was blocked by the impressive Jack O’Connell, while another attempt from the England striker just curled wide of the far post far after good work from Demarai Gray.

At the other end, Leicester were thankful for Harry Maguire’s alertness when a poor clearing header from Danny Simpson fell at the feet of Enda Stevens. The defender, who was a ballboy at Bramall Lane before coming through the youth system, reacted quickly to fling himself in front of the ball and save a certain goal.

Vardy, who is also from Sheffield but grew up supporting Wednesday, should have given his side the lead soon after following a slide-rule pass from Mahrez but could not find a way past goalkeeper Jamal Blackman.

Wilder withdrew Manchester United loanee James Wilson at half-time and threw on 20-year-old Wales international David Brookes in an attempt to rouse his side. Brooks had not featured this year after contracting glandular fever and he immediately looked a threat on the break. But it was Leicester who continued to dominate proceedings, albeit without creating any clear chances to break the deadlock.

That changed in the 66th minute when Mahrez picked up the ball on the right touchline. A twisting and turning run that left his marker George Baldock bamboozled eventually saw him find space to deliver a deep cross to the back post which Vardy did well to loop over the helpless Blackman.

The goalkeeper then made amends with a brilliant save from Gray to keep United in the tie, while his counterpart Kasper Schmeichel also had to be at his best to deny Baldock.

Vardy then had the ball in the net for a second time, only for the assistant to rule that Mahrez had been fractionally offside when he headed it across goal. After that Leicester were forced to dig deep against opponents who suddenly fancied their chances of forcing a replay.

The hosts, led by returning captain Wes Morgan, stood firm however and there wasn’t a Leicester fan in the house who did not get out of their seat to applaud when Mahrez left the pitch in injury time.