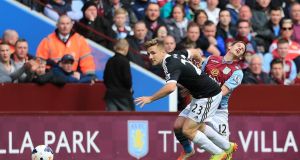 Luke Shaw insists he has no problem putting the hard yards in to make sure he is fully fit for his first season as a Manchester United player.

In a frank interview following United’s penalty shoot-out win over Inter Milan, Shaw conceded manager Louis van Gaal had every right to criticise him over his lack of fitness. And the 19-year-old admitted he underestimated just how challenging it would be to make the step up from Southampton to Manchester United.

Van Gaal revealed at a press conference on Monday that he has had to devise a special training programme for Shaw, who turned up for pre-season out of shape after three weeks off.

The Dutchman was clearly not too happy with Shaw given that he had only just sanctioned the teenager’s expensive transfer from the south coast. Shaw has no qualms with his manager’s public criticism of him.

“Obviously I have seen that, and it’s something I totally agree with,” Shaw said when asked about Van Gaal’s press conference comments. “To play in this formation you have to be really fit. I am fit but I am not at the high level he demands.

“I have got to get fitter to get up and down (the wing). It’s something I have got to work on.” Shaw became the fourth most expensive defender in history when he swapped Southampton for United in a deal that could cost the Old Trafford club £28million.

Although he played for England at the World Cup, it is worth remembering Shaw only made his full Premier League debut in November 2012. Shaw admits he miscalculated just how physically demanding it would be to step up and become United’s first-choice left-back as part of Van Gaal’s new 3-5-2 system. “It was a surprise. I didn’t come into United thinking it would be much harder,” Shaw said.

“That’s something that I think I made a mistake on. “I thought it was just going to be the same but it’s the biggest club in the world and there is world-class players in training.

“That is something that is going to push me on and it’s something I am looking forward to doing.”

To show just how much work he thinks Shaw needs to do, Van Gaal made the left-back partake in a gruelling fitness session on the morning of the win against Inter Milan, which came on penalties after a 0-0 draw.

The England defender only made it onto the pitch when youth product Reece James pulled out of the match with an injury. Shaw thinks the extra training sessions are already paying dividends.

“I want and need the staff to push me on so they can do what they want. It will only help me in the long run,” said Shaw, who impressed as a second-half substitute at the FedEx Field in Washington.

“I wasn’t meant to play (against Inter) so I trained on Tuesday morning. “Me and the staff decided it would be better to push me in a harder training session. “But I came on and played 45 minutes. I felt great. I could have played another 45 so that’s something that shows there is a progression there after the last game.

“The focus is now to get fitter and fitter and to be flying by start of season.” Shaw and the rest of his United team-mates were due to train in the US capital on Wednesday afternoon. They will fly to Detroit on Thursday ahead of their clash against Real Madrid, which is expected to take place in front of a crowd of over 100,000 people.

A win for United, who beat Roma in their first match, will see them qualify for the final of the International Champions Cup, which takes place on August 4 in Miami. ends