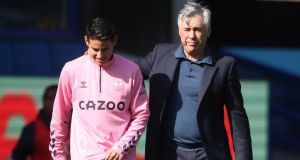 Biggest Lousers of the Week

We’ll go with German side SV Holdenstedt II who play their football in Lower Saxony in what is the 11th tier of the league.

SG Ripdorf/Molzen, who Holdenstedt were scheduled to play, asked for the game to be postponed because an opposition player in their previous outing had subsequently tested positive for Covid-19.

That appeal was rejected, though, and Ripdorf/Molzen faced being fined if they didn’t fulfil the fixture. So, they took to the field, but: “When the game kicked off, one of our players passed the ball to the opponent and our team walked to the sidelines. The referee booked our captain for unsportsmanlike conduct,” the club’s chairman Patrick Ristow told ESPN.

“Our players returned to the field but they only stood on the pitch. They did not go into direct duels and observed the social distancing rules, keeping two-metres between them and Holdenstedt players.” (Those who suggest this sounds like how Victor Lindelof plays most weeks are just mean).

Mind you, seeing as it only takes a minute to score a goal, they must have missed 53 chances. But, lousers indeed.

“James is not the fastest player in the world, but if I was worried about that I would have signed Usain Bolt.” Everton boss Carlo Ancelotti, unperturbed about new boy Rodriguez’s pace being less than lightning.

12.11 - That’s how many billion Euros Fifa reckons football across the world has lost since the start of the pandemic. Strewth.

“Jack Grealish reminds me of Andres Iniesta in his prime.” The former Aston Villa forward Gabby Agbonlahor, angling for a new career in stand-up comedy.

“At the beginning of my career when I was 9 or 10, you got candy for every goal you scored.” Considering how many goals Chelsea signing Timo Werner scored as a young fella, it’s a wonder that he has any teeth left.

“I just don’t know where we are with it all, I haven’t got a clue. Am I allowed to see my nan? Am I allowed to see my mum? We can have 1,000 people in a ground but I can’t go and have a pint with my mates unless there’s only six of us?” Sheffield United boss Chris Wilder, bewildered about the English Football League allowing a thousand fans in to a handful of ‘pilot’ matches at the weekend when he can’t hang out with more than five of his mates.

Probably Dutch Eredivisie side FC Emmen after their football association, the KNVB, blocked a sponsorship deal worth €500,000 because it was deemed to have been in breach of one of their rules which forbids sponsorship that is “in conflict with morality, good taste or decency”.

The forbidden deal? With sex toy company EasyToys. “We are very disappointed,” their CEO Eric Idema told Goal. “We hoped to contribute to breaking the taboo that still surrounds our industry. The fact is, though, that eroticism and sexuality are still uncomfortable subjects for some, as evidenced by the decision of the KNVB. And this is while our toys are literally in two of every four Dutch households.”

The collective response from the FC Emmen players, who might have been wondering about the response when the crowds return? Probably: “Phew.”

“My only regret is not hitting that asshole in the face.” A somewhat unrepentant Neymar after he was sent off for slapping Marseille’s Alvaro Gonzalez who he accused of making a racist remark towards him.

“I might give up following Leeds United and take up a less stressful hobby, like chainsaw juggling or crocodile massage.” Frazzled comedian Rob Mulholland after Leeds went from 4-1 up against Fulham to just about holding on for a 4-2 win.

“He behaves with the Oranje and Liverpool like the finished star who shows a little too much that he does not like his fellow players. At the same time, he plays lazy and nonchalant. He makes mistakes.” Apart from that, Dutch old-boy Wim Kieft (yeah, the bugger who broke our hearts with that flukey, spinny goal in Euro 88), has no complaints about Virgil van Dijk.