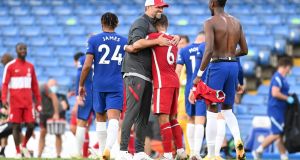 There was no chance of Jürgen Klopp lowering the volume, even when his brilliant team were closing in on a polished victory over one of the sides hoping to reel them in this season. No technical area could hold Liverpool’s manager. Every time Klopp saw complacency setting in, he marched down the touchline to bellow at his players, who could have been forgiven for checking the scoreboard just to make sure that they were still ahead.

But perhaps this demand for perfection is what it will take for Liverpool to retain their title. Or maybe Klopp wanted to kill the idea that his all-conquering red machine is in need of some servicing. Either way, there does not appear to be anything wrong with Liverpool. The Premier League champions looked as hungry as ever as they swatted Chelsea aside, giving Frank Lampard’s side a nasty reality check two games into the new season.

In the end the prospect of Chelsea being ready to remove Liverpool’s crown looked faintly ridiculous, even at this early stage. While Lampard has spent more than £200m on new signings, Kepa Arrizabalaga remains a problem in goal and Chelsea’s defensive frailties flared when Andreas Christensen received a red card for fouling Sadio Mané, who went on to settle the contest with two sharp goals.

The sense of a bitter rivalry stirring again had upped the ante. There has long been animosity between these clubs and there have been plenty of barbs since Klopp and Lampard clashed at Anfield in July. Lampard jabbed, complaining about Liverpool breaking a touchline code of conduct by “giving it the big un” after winning the title, and Klopp hit back, talking about having to be different to clubs whose oligarch owners have sanctioned big spending in the middle of a pandemic.

The narrative was set, with Chelsea back in their roles as villainous giants. Yet Klopp’s observation about Chelsea’s transfer business was a tad disingenuous. Liverpool have spent plenty of money on their way to becoming the most fearsome side in the country and, having signed Thiago Alcântara from Bayern Munich and Diogo Jota from Wolves this past week, the idea of them as underdogs was a hard one to buy into as they set about putting Chelsea in their place.

After all, Lampard is the coach with everything to prove after being backed so heavily by Roman Abramovich. Chelsea finished fourth last season, 33 points behind Liverpool. They are developing under a coach in his third season of management and are a long way from ironing out their frailties, whereas Liverpool are a settled unit.

Still, Liverpool had a point to prove after a shoddy defensive display in their 4-3 win over Leeds. They slowed down after being confirmed as champions in late June, winning four of their final seven games last season. Impertinent opponents have glimpsed holes of late.

A statement was required and Klopp roared with delight when Liverpool’s pressing forced Kurt Zouma to slash a clearance out for a throw. The visitors pushed high, squeezing Jorginho at the base of Chelsea’s midfield.

Chelsea were restricted to counterattacks during the first half. They wanted to use the pace of Timo Werner, trusting that the German would have the beating of Fabinho, who was pushed alongside Virgil van Dijk in the centre of Liverpool’s defence because Joël Matip and Joe Gomez were injured.

It looked like an avenue for Chelsea to explore, especially when Werner darted past Fabinho in the third minute. By the 20th minute, though, the makeshift centre-back had the upper hand. When Mateo Kovacic released Werner, a shot seemed certain until the German ran into Fabinho, who stood tall and won the ball with an imperious tackle.

Liverpool could afford to step up and gave their hosts little time to pause for breath. Chelsea’s midfielders, Jorginho, Kovacic and N’Golo Kanté, were too ponderous in possession, while Mason Mount and Kai Havertz were quiet on the flanks.

While Chelsea threatened when Werner fired wide after a sharp turn, it was hard to feel confident about their defence keeping Liverpool out. Andy Robertson miscued a volley and the game changed when Jordan Henderson’s pass released Mané, who was hauled down by Christensen 30 yards from goal. Kevin Friend, the referee, showed a yellow card before a viewing of the pitchside monitor left Chelsea down to 10 men.

It was a reminder that Chelsea, who conceded 54 league goals last season, remain neurotic at the back. Lampard had to adjust. Havertz, struggling with an injury, made way for Fikayo Tomori during the break. Klopp added a touch of refinement, bringing on Thiago for his debut.

Chelsea cracked five minutes into the second half. Roberto Firmino raced behind Marcos Alonso after a one-two with Salah and crossed for Mané, who got in front of Reece James before heading past Arrizabalaga.

Worse was to come when Arrizabalaga dithered on the ball, allowing Mané to block his pass and tap into the empty the net. It was another dismal error from the Spaniard and bad timing given that Chelsea are on the verge of signing Édouard Mendy from Rennes.

Chelsea, who left Antonio Rüdiger out of their squad, gave themselves hope when Werner’s run drew a foul from Thiago. But Alisson Becker had other ideas, saving Jorginho’s weak penalty.

Klopp screamed at his players, urging them to keep the ball. Chelsea are striving to reach those standards and will surely improve. Havertz is finding his feet after his move from Bayer Leverkusen, while Lampard is still waiting to give Ben Chilwell, Hakim Ziyech and Thiago Silva their debuts. On this evidence, though, Chelsea have a long way to go before reaching Liverpool’s level. - Guardian

Jason Holder ‘disappointed’ in Australia and Pakistan not taking the knee 13:04
Arsène Wenger: Arsenal was a matter of life and death to me 10:06
Extremes of sweet and sour for Solskjaer as Man United show signs of revival 10:08
Slaven Bilic hits out at €16.95 pay-per-view for West Brom’s draw with Burnley 08:31
Patrick Mahomes shines as Kansas City beat Buffalo Bills 08:14