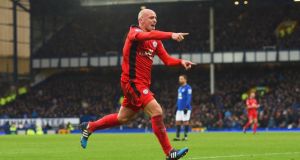 Roberto Martínez used his programme notes to accuse José Mourinho’s Chelsea of “trying to influence the referee” on Everton’s recent visit to Stamford Bridge but his problems lie much closer to home. Bottom of the table Leicester City became the 10th team to leave Goodison Park with a result in the Premier League this season as Tim Howard endured a calamitous afternoon in goal. Only an 88th-minute own goal from Matthew Upson denied Nigel Pearson’s visitors a precious away win.

Howard, hugely fortunate to be recalled to the Everton side in place of Joel Robles, was at fault for both Leicester goals as substitutes Jamie Vardy and David Nugent injected much-needed menace into the visiting display. Romelu Lukaku scored a hat-trick in Everton’s 4-1 win at Young Boys on Thursday but missed a catalogue of clear chances before throwing himself at Christian Atsu’s cross to help salvage a point two minutes from time.

Everton had won only two of their previous six league games following Europa League duties but results have been no better without the extra demands of European competition. The distraction excuse does not apply. If anything, the Europa League should have enhanced Everton’s fragile self-belief given their best performances of the season have come against Wolfsburg, Lille and in Berne. But convincing, clinical victories in Europe are not being replicated domestically. This was another Premier League display lacking intensity and ingenuity from Martínez’s side, who have now gone six consecutive home games without a win.

Martínez gave a first start to Aaron Lennon who was involved in the home side’s brightest moments of a sterile first half but was too often on the margins of the game to making a telling contribution. Twice the on-loan recruit from Tottenham Hotspur burst away from Paul Konchesky but Lennon was unable to find Lukaku with the first attempt and, having teed up the striker with the second, Ross Barkley blazed over after Wes Morgan’s challenge on the Belgium international rolled into his path.

Lukaku also shot wastefully over Mark Schwarzer’s bar when Steven Naismith and Séamus Coleman combined to create Everton’s clearest opening before the interval, the Irish defender pulling the ball back invitingly from the by-line only for the £28m striker to miss from six yards.

It was the visitors who carried the greater threat despite rarely breaking in numbers from their five-man defensive line-up. That changed when Pearson introduced Jamie Vardy and David Nugent in the 62nd minute. Leicester’s potency, and the contest, was transformed at a stroke.

Leicester went close with their first attack when the lively Jeffrey Schlupp evaded Leighton Baines inside the penalty area and forced Howard to save at his near post. Andrej Kramaric almost gave Pearson’s team the lead with a dipping shot from inside the area that beat Howard but sailed centimetres over the bar and Schlupp put two good chances wide shortly before half-time.

The Ghana international should have put the visitors in front shortly after the restart when Howard’s knack of parrying shots and crosses straight to an opponent made its first appearance of the game. Matty James forced Everton’s keeper into a low save from the edge of the box but the ball rebounded perfectly for Schlupp to convert. He shot two yards wide under pressure from Coleman instead, but Everton and Howard would not be reprieved again.

Martínez was the first manager to make a double substitution but it enlivened Everton only sporadically. The anonymous Barkley was withdrawn to polite applause, the industrious Muhamed Besic to widespread boos, but the complaints ceased when Lukaku turned into space for the first time and released Naismith inside the area. The Scot cut inside Morgan and squeezed a shot between the Leicester captain and Robert Huth that tricked inside the near post with Schwarzer wrong-footed. Leicester had a penalty claim for a handball by Coleman dismissed seconds earlier.

Pearson responded positively and his substitutes combined via a helping hand from Howard to bring the visitors level within two minutes of their introduction. Vardy broke clear of James McCarthy far too easily down the right and drilled in a low cross that the Everton keeper could only push into the path of Nugent. The boyhood Evertonian duly converted from three yards and kept his celebrations in check.

Lukaku squandered a glorious chance to restore Everton’s lead when put clear by McCarthy and the miss assumed greater significance when Leicester scored a second moments later. Howard flapped at a deep cross from the right by Danny Simpson, Vardy collected the loose ball at the back post and squared for Esteban Cambiasso to fire beyond the hapless USA international.

Everton were staring at a damaging defeat but Lukaku, having missed yet another good opening from Naismith’s through ball, finally made amends when substitute Christian Atsu produced a neat turn and cross from the left.

Lukaku steered a diving header towards the far corner although the final touch came from Matthew Upson. It was enough to salvage a point but not to spare Martínez’s men from another chorus of understandable jeers on the final whistle.