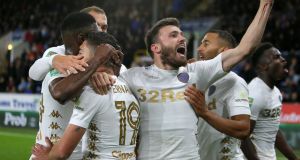 Liverpool were not the only Premier League team to exit the League Cup inside 90 minutes on Tuesday night, as Stoke and Huddersfield both fell to away losses at Bristol City and Crystal Palace respectively.

The Potters were undone by two goals in 10 second-half minutes from Famara Diedhiou and Matt Taylor, while Roy Hodgson earned his first win as Palace boss thanks to Bakary Sako’s header early on.

Paul Clement’s Swansea also made into the last 16 as Alfie Mawson and Jordan Ayew struck in the second half of their 2-0 success at Reading.

Patrick Bamford bagged a brace as Middlesbrough won 2-0 against Aston Villa, who ended with 10 men due to Tommy Elphick’s red card, and Norwich’s Mario Vrancic also netted twice in their 3-1 victory at Brentford.

Three ties went to extra-time and Burnley’s home clash with Leeds had to be determined by a penalty shoot-out which the Whites won 5-3.

It had been 0-0 at Turf Moor until the 80th minute when Hadi Sacko’s strike began a flurry of late goals. Ex-Leeds striker Chris Wood levelled from the spot in the 89th minute, with Pablo Hernandez restoring the visitors’ lead with a penalty of his own in the fourth minute of stoppage time only for Irish international Robbie Brady to force extra-time with a free-kick shortly after.

James Tarkowski was the only Clarets player to see his penalty saved in the shoot-out and Stuart Dallas scored the decisive spot-kick to send Thomas Christiansen’s men through.

Bournemouth claimed a home victory over Brighton for the second time in five days as Norway international Josh King steered in a winner nine minutes into extra time.

Bristol Rovers, the only League One club involved on Tuesday night, exited at the hands of Wolves thanks to Bright Enobakhare’s 98th-minute winner during an extra-time period where Tom Lockyer was dismissed for the visitors.

1 Georgia and Fiji in line to join Six Nations sides in eight-team tournament
2 All in the Game: Jack fact-cheques money story
3 Ken Early: Another Mourinho masterclass in going through the motions
4 Sport rallies around David McGoldrick following online racial abuse
5 Malachy Clerkin: Sleep well Jack, you made us all happy
Real news has value SUBSCRIBE