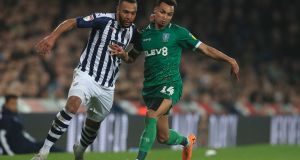 West Brom and Leeds both left it late as they moved clear of the pack at the top of the Sky Bet Championship.

The Baggies were 2-1 winners over Sheffield Wednesday thanks to an 88th-minute penalty, while a last-minute own goal gave Leeds a 2-1 win at Luton.

With Preston losing at Derby, West Brom are top on 36 points and Leeds second on 34, with a three-point gap to North End in third.

Charlie Austin’s penalty was the clincher for West Brom, with Hal Robson-Kanu and Steven Fletcher (penalty) having traded earlier strikes. Liam Palmer was sent off for Wednesday in time added on.

At Kenilworth Road, Patrick Bamford’s goal for Leeds was cancelled out by James Collins, with James Pearson then putting through his own goal to win it for United, despite it looking as though Bamford was claiming it himself.

Brentford’s rise up the table continues, Ollie Watkins scoring the only goal as they beat Reading 1-0, while Martyn Waghorn’s strike was enough for Derby to see off Preston.

Jed Wallace’s impressive season continued as he scored the only goal in a 1-0 Millwall win at Swansea, while Ryan Yates was sent off as Nottingham Forest drew 0-0 at Bristol City.

Marc Roberts earned Birmingham a point as they drew 1-1 at Huddersfield, for whom Fraizer Campbell had opened the scoring.

Michael O’Neill’s first home game in charge of Stoke ended in a second win thanks to Mame Biram Diouf’s 90th-minute goal in a 2-1 victory over Wigan.

In the day’s early game, Neil Harris’s first game in charge of Cardiff ended in a 2-2 draw at Charlton.

Conor Gallagher and Jonathan Leko had the Addicks 2-0 up before the break, but Nathaniel Mendez-Laing and Lee Tomlin turned things around after it.

Bradley Dack scored a winner for Blackburn four minutes from time as Gerhard Struber’s first game in charge of Barnsley ended with a 3-2 defeat.