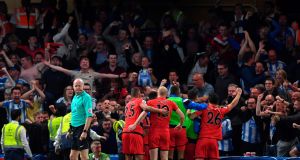 Huddersfield Town’s sojourn in the Premier League was supposed to be fleeting, a one-season dalliance with the elite, but David Wagner and his side have proved all-comers wrong. They heaved to contain Chelsea here, their defending late on increasingly desperate but ultimately inspired, to claim the draw that sees them safe. Theirs is a staggering achievement.

The final whistle was greeted with an outpouring of joy from travelling fans and players alike, a campaign’s unlikely objective achieved against all the odds, while in the distant corner of south Wales despair must have set in for good. It is hard to see how Swansea, left seeking a nine-goal swing in their goal difference with Southampton, will survive now.

Chelsea’s hopes of Champions League football have also been severely dented. They will retain slim hopes on the final afternoon, but nothing more. If this proves to have been Antonio Conte’s final game in charge at Stamford Bridge, then to have seen his team’s aspirations broken on stubborn Huddersfield defence will leave him utterly deflated. It was not supposed to be like this.

This had always felt a contest likely to test Chelsea’s patience. Huddersfield had arrived eager for that point, and bolstered by the morale-boosting stalemate with the champions. To have become the first visiting side to emerge from the Etihad Stadium this season having claimed a top-flight clean sheet had been an eye-catching achievement, even with Pep Guardiola’s Manchester City in celebratory mode, and they were just as resolute here. Aaron Mooy and Jonathan Hogg snapped into challenges with relish, while a five-man rearguard suffocated the space in the visitors’ penalty area.

Chelsea playmakers invariably picked up possession in the centre-circle to glance up and discover all 10 of Town’s outfield players cluttering up their sight line ahead. The task of picking through the mass of red and black shirts invariably fell to Cesc Fàbregas or N’Golo Kanté, the latter as energetic as ever, but there was always the propensity to panic.

Perhaps the hosts’ display would have been more assured had Antonio Rüdiger not guided a volley wide from point-blank range 12 minutes in, the German arriving at the far post to meet César Azpilicueta’s nod-down at Fàbregas’s corner. How the home side had craved an early goal.

Instead, with Jonas Lössl taking his time at every goal-kick, they departed at the break exasperated, with players and coaching staff incensed Lee Mason had blown for half-time while Willian was preparing to take a corner.

Carlo Cudicini had to step in to usher them away from the official, lost amid the bodies, with the incident another little victory for Town.

Huddersfield had simply refused to wilt. Lössl saved from Marcos Alonso and Álvaro Morata – one of six changes made by Conte to freshen up his team – but everything else flung at him was increasingly optimistic. When Kanté did slip Morata beyond Christopher Schindler in on goal, the striker’s touch took him virtually to the byline. His attempt duly drifted across the goal-line and wide.

While Chelsea were all chuntering frustration, local nerves frayed further as Rüdiger headed Willian’s inviting free-kick over the bar early in the second half, Huddersfield thrilled at the resilience they had demonstrated.

Wagner had taken this team to the brink of safety despite his charges having scored only 27 league goals before this occasion. There was an inevitability that the 28th would be plucked from the home side’s monopoly of the ball. Town had hardly gained a glimpse of Willy Caballero but, once Willian lost out to Chris Lowe, Mooy had the simple task of lofting a pass into space beyond Andreas Christensen.

On to the loose ball lumbered Laurent Depoitre, a striker noted more for his brawn than any searing pace. The Belgian attempted to lift his shot over the onrushing Caballero as the pair collided on the edge of the home side’s penalty area with the attempt suffocated by the goalkeeper. While the Argentinian lay prone on the turf, Depoitre retained his composure to lift a follow-up beyond Rüdiger and into the gaping net. A first goal of 2018 was celebrated with gusto by Wagner and his staff, while the visiting players massed in front of their support.

Conte’s response was to fling on the cavalry, Olivier Giroud and Eden Hazard charged as their saviours, albeit parity was only restored with a dash of good fortune. Azpilicueta’s low centre had been fizzed across the six yard box, but Mathias Jørgensen, in attempting to hack it clear, only succeeded in belting the ball on to Marcos Alonso’s forehead. In it flew beyond a startled Lössl, the Spaniard just as shocked to have been rewarded in such bizarre fashion.

The home side’s pressure was incessant thereafter, Schindler and his team-mates defending stoically and Lössl summoning a wonderful save to push Christensen’s header on to the post. Everything Chelsea threw at them, Town somehow repelled. This was their night to cap an admirable season. – Guardian service