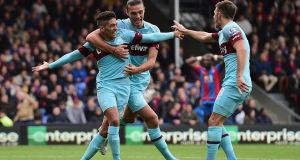 The Eagles appeared to have held on for a point despite playing the entire second half with 10 men following Dwight Gayle’s brainless red card.

But West Ham’s pressure paid off when Argentinian winger Lanzini rifled home in the 88th minute and Payet put the icing on the cake in injury time.

Carl Jenkinson had put the visitors ahead with his second goal in two matches, but Yohan Cabaye equalised moments later with a twice-taken penalty.

Payet had already threatened twice for West Ham before, in the 23rd minute, he slid the ball to former Palace winger Victor Moses, who fed overlapping full-back Jenkinson in the area.

The Arsenal loanee had sneaked in behind the daydreaming Wilfried Zaha and neatly tucked the ball past Wayne Hennessey with the outside of his right foot.

However, two minutes later Jenkinson was the central figure as Palace forced an equaliser.

The right-back and Gayle seemed to collide as they both stretched for the ball in the box, but referee Mark Clattenburg ruled in the Palace forward’s favour and pointed to the spot.

Cabaye duly tucked away the penalty, only for Clattenburg to order a retake after spotting Gayle had encroached into the area.

Nevertheless, Cabaye held his nerve and lifted the ball high into the opposite side of the net despite Adrian getting a hand to it.

Gayle may have been breathing a sigh of relief at that stage but his next reckless act, a needless lunge on Payet, earned him a booking.

That proved costly for the striker when, in another rash challenge, he caught Cheikhou Kouyate late and was sent off a minute before half-time.

Not for the first time this season, Eagles boss Alan Pardew hauled off Zaha at half-time, while Andy Carroll was introduced shortly after as the Hammers attempted to make their numerical advantage count.

Diafra Sakho glanced Jenkinson’s cross against a post but it appeared West Ham would head back to east London frustrated.

But when Carroll headed fellow substitute Mauro Zarate’s cross back across goal Lanzini was on hand to smash the ball past Hennessey.

And in stoppage time Lanzini’s through ball sent Payet clear and the Frenchman deftly chipped Hennessey to seal West Ham’s fourth away win of the season.

Southampton had appeared comfortable when goals from Jose Fonte and Virgil van Dijk had given them a two-goal half-time lead, but Leicester gradually and impressively recovered the point that their exertions deserved.

The draw keeps them fifth in the Barclays Premier League table, even if that position is likely to be difficult to maintain, and three points ahead of eighth-placed

James McClean sparked a melee at the final whistle after Costel Pantilimon’s error gifted West Brom a vital win over Sunderland. Former Black Cats midfielder McClean celebrated in front of the travelling fans and was confronted by Danny Graham and Lee Cattermole.

McClean claimed he was ‘hung out to dry’ by Sunderland over his decision not to wear a Remembrance Day poppy on his shirt during a game against Everton in 2012.

It was a flashpoint in an otherwise dull game as Sam Allardyce took charge of Sunderland for the first time, but could only watch in horror as his goalkeeper tossed away what would have been a valuable point at The Hawthorns.

Defeat only underlined the size of the job Allardyce has to keep the Black Cats in the top flight as he watched them match the Baggies for much of the game, only to be undone by a mistake