Klopp admits he was lucky to avoid sanction over outburst 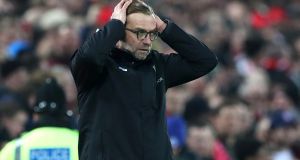 Jürgen Klopp has admitted he was fortunate to avoid sanction for his outburst at Neil Swarbrick on Tuesday and that it is difficult for all Premier League managers – Jose Mourinho included – to switch off their emotions in the heat of a game.

Mourinho claimed to be treated differently to other managers such as Klopp and Arsène Wenger having been warned about his behaviour during Manchester United’s goalless draw with Hull City on Wednesday. In contrast, Swarbrick, the fourth official during Liverpool’s draw against Chelsea on Tuesday, told the Liverpool manager he admired his passion after Klopp’s furious reaction to Simon Mignolet’s penalty save from Diego Costa.

Klopp insists he has “no idea” why the United manager continues to reference his behaviour but admitted he was grateful regarding how Swarbrick handled Tuesday’s situation.

“I think it depends on the fourth official,” he said. “We all know what we can do. When I saw the pictures afterwards it didn’t look too nice but it was not as bad as it looked so that is why I said what happened. Maybe I was lucky with what the fourth official said because I’ve never heard something like this before.

“There are different ways to handle the situation. It is quite an emotional game and to switch off emotions is not that simple. We struggle – not only myself and Jose but Arsène Wenger and a lot of other people struggle. We are all different; sometimes we get a fine, sometimes not. It’s not what we want to do it nor is it a tactic. It was worse with me when I was younger. I have already improved. I had no idea why he [Mourinho] spoke about me.”

Klopp offered no hope to Mamadou Sakho of the defender reviving his career at Liverpool once a loan deal with Crystal Palace expires in the summer. The France international was ostracised at Anfield for several disciplinary issues before joining Palace on loan on deadline day.

“At the moment he is on loan and he still has a contract at Liverpool but that is not the thing we talk or think about at this moment. It is a solution for the moment and we can wait for new impressions and what happens.” Guardian service