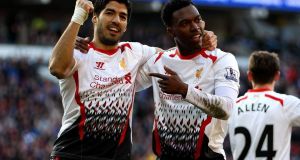 After 16 games last season Luis Suárez and Daniel Sturridge had scored 28 league goals between them; without them, Liverpool have scored only 19 goals in the same number of games. Photograph: Ben Hoskins/Getty Images)

There are certain managerial cliches that we really do not like, phrases which we view with suspicion, sayings that seem to come too easily. One is: ‘It’s all about the players.’

When we hear men like Harry Redknapp or Steve Bruce say this, somewhere in our reaction is a sense of them shifting responsibility. We think of this as a way of deflecting managerial input, of moving blame upstairs to those who run the budget, or sideways into the treatment room. Anywhere but the mirror. Particularly during a bad spell.

We distrust this because we think that there’s surely more to management than simply picking a first XI and some subs. And, by the way, does Pep Guardiola make this kind of remark?

And yet, to consider Brendan Rodgers over the past weeks, as Liverpool’s season has deteriorated and they have exited the Champions League at the group stage and lost Premier League matches limply at St James’ Park and Selhurst Park, the notion that is all about the players has to be addressed.

Because the truth is, we still do not know exactly how good or otherwise Brendan Rodgers is as a manager.

A significant part of the reason for our equivocation over Rodgers stems from players, two in particular: Luis Suárez and Daniel Sturridge. Without Suárez and Sturridge, where would Liverpool have been last season? Where, in turn, would Rodgers have stood in Liverpool fans’ eyes?

Suárez and Sturridge’s natural expression of their talent made such a difference in numerous matches that it was, and is, tempting to reduce Rodgers’ input: it was all about the players.

Liverpool have scored 19 goals so far this league season; after 16 games of last season they had scored 39 – Suárez had 17 of them and Sturridge had nine.

Reviewing the unparalleled influence of Suárez and Sturridge on Liverpool’s form brought to mind a favourite line from 2014, Sid Lowe’s assessment of Lionel Messi’s impact on Argentina after two games of the World Cup.

Messi had scored the decisive goals against Bosnia and then Iran – in injury-time – and the goals camouflaged much of what else Argentina did or did not have to offer. There was a debate as to Argentina’s true structure and quality, and Lowe wrote: “On one level, talk of systems seemed flawed: there was not a system. Messi is the system.”

When an individual reaches the transformational excellence of Messi, a team’s result are skewed positively, as, sometimes, is the manager’s reputation.

In 2013-14 Suárez became a transformational force for Liverpool and they were bound to miss him just as Tottenham missed Gareth Bale. In his final season at White Hart Lane, Bale scored 21 league goals, more than 30 per cent of Spurs’ total; without him, last season the top scorer was Emmanuel Adebayor with 11. Spurs’ goal tally fell by more than 15 per cent, they won fewer points and dropped a place in the table.

At Liverpool, with Suárez and Sturridge rampant, with Raheem Sterling blossoming alongside the pair, and Steven Gerrard and Jordan Henderson flourishing, it seemed as if Rodgers had devised a system that was bringing the best from his squad. It wasn’t all about the players, it was about the manager too. There was mutual appreciation and all was well in the red world.

Rodgers recognised the extremities of analysis recently, saying: “Last year, when you do so well, it’s all down to the players – and rightly so. The recruitment is good, everything in the club is good. When you’re doing not so well, it’s down to the manager. That is football.”

What Liverpool followers would like to be seeing is a system shorn of its twin stars coping by becoming more collegiate, the sum of more than its parts. This is the chemical part of football management, finding a blend that lifts the ordinary into another realm.

For Rodgers, this requires him finding methods to extract more from the likes of Joe Allen or Henderson who, when they look up, no longer see Suárez and Sturridge weaving, but Mario Balotelli or Rickie Lambert. This is not straightforward but it is one of the issues that will define Rodgers’ time at Anfield.

Sterling up front looked a useful idea at Bournemouth on Wednesday, but then people weren’t saying that after the chances he missed at Old Trafford last Sunday.

You can imagine Harry Redknapp watching that game and muttering: “Suárez would’ve scored those.” And Redknapp’s right. When the players are as good as Luis Suárez was last season, it’s often all about the players.