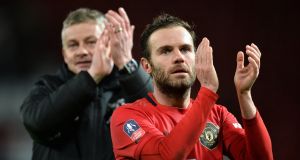 Manchester United will travel to Liverpool on Sunday in high spirits after this elimination of Wolves. Ole Gunnar Solskjær’s side next meet Tranmere Rovers or Watford in the fourth round and can take on their fiercest rival boosted by a second win of the week.

Before a below capacity crowd of 67,075 the contest dipped following the break but of more concern for United is how Marcus Rashford, on as a 64th-minute replacement, lasted only 15 minutes before being hurt, having to be replaced himself by Jesse Lingard.

Solskjær drafted in Sergio Romero, Mason Greenwood and Daniel James to the side who had beaten Norwich on Saturday; Nuno Espirito Santo stood down only Rui Patricio for John Ruddy from the 1-1 draw with Newcastle United.

This was a fifth time Solskjær’s United had faced Wolves, winning precisely none of the previous four, the count standing at two losses and two draws.

James came close to giving United the best start in what was an effervescent opening half of football. Juan Mata had shone against Norwich and he was again in creative mood. The Spaniard’s pass put the Welshman away and only a deft hand from Ruddy thwarted him having a chance to open the scoring.

Raul Jimenez did fashion a clear sight of Romero’s goal and this was via a swivel inside United’s area that sent Brandon Williams, Harry Maguire and Nemanja Matic into a different postcode. Adama Traore had delivered a pinpoint pass to the Mexican striker so this was shaping to be a sublime goal, only for him to hit the ball straight at Romero.

This was all part of a breathless start that was about to have the latest instalment in the VAR soap opera. Fred and Matic had a farcical mix-up in which the former smacked the ball off the latter into Jimenez’s path. Yet when Maguire went to challenge the ball ricocheted off the striker’s right hand and after Neto finished VAR ruled the effort out. While Jimenez was looking the other way and thus had no agency in the action this was the correct adjudication of the requisite regulation.

Cue frustration for Wolves and gleeful schadenfreude for the United faithful. The emotions were reversed, though, when a sharp Aaron Wan-Bissaka pass released Anthony Martial only for him to slide to the turf.

Next up in this contest of open and entertaining action was a corner claimed by Jonny. Joao Moutinho took this short, received the ball back from Jonny and United were relieved to clear his cross. Now, Mata took aim at the other end and Ruddy saved well to his left. Then, United had a lucky escape: a Jonny cross was headed by Ireland defender Matt Doherty past Romero but rebounded off his right post. Jimenez looked to pounce on the rebound but was offside.

A helter-skelter first half now featured Matic giving the ball away, chasing and winning it back, before igniting an attack that had Martial scampering forward but he could only shoot tamely.

All that was missing as the interval neared was a goal or three to reflect the frantic fare each team had offered up. James had a final clear sight of goal but he smashed the shot straight at Ruddy, who beat the ball out.

Each manager’s instructions for the second half may have been similar: tighten up at the back and be more ruthless when opportunity knocked.

Mata was the first to take aim but his 25-yard effort lacked direction. Solskjær had Rashford warming up and United’s top scorer had a front-seat view from the touchline of James firing past Ruddy and coming close to breaking the deadlock.

Any control for United came via Matic and Fred in midfield though the home team were still vulnerable when Wolves wrested back possession, moved forward and worked the ball to the eager Jimenez. But he, again, missed with an attempt from an angle.

Quality had taken a downturn. Even Kevin Friend seemed affected, the referee showing Neto a yellow card when Williams appeared to jump over his leg rather than be felled by it.

Yet Williams did impress with a show of muscular, pacy defending that took him back alongside Neto as he sprinted into the area, the left back dispossessing the Wolves winger and clearing the danger while drawing applause from Romero.

On 65 minutes Solskjær removed James for Rashford and Greenwood for Andreas Pereira. And now, at last, Mata struck: the playmaker ran on to a Martial through ball and chipped Ruddy expertly.

Espirito Santo’s reaction was to take off Neto for Morgan Gibbs-White but with United in the ascendancy Wolves required something special to save the tie. They failed to find it and so United have momentum for their trip to Anfield. – Guardian