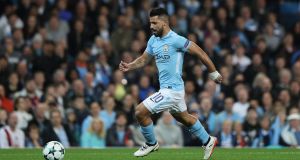 Manchester City forward Sergio Agüero has confirmed that he suffered a fractured rib when his taxi crashed in Amsterdam on Thursday evening. Pep Guardiola added that Agüero is set to miss Saturday’s match against Chelsea, and Argentina’s World Cup qualifiers in early October.

A statement from the club said: “Sergio Agüero will be assessed by club doctors today [Friday]after being involved in a road accident on Thursday. The City forward was in Holland on his day off and has sustained injuries. He will return to Manchester this morning and his status will be checked ahead of tomorrow’s Premier League clash at Chelsea.”

Speaking to Radio Metro de Argentina, the forward said: “The taxi driver did not see the curve and skid. And when he skidded, we hit him with the pole.

“I broke my rib, now I’m resting. It hurts me badly. I’ll be discharged in a little while.”

Guardiola does not yet know the full extent of Agüero’s injuries and how long he will be out for, but said he was relaxed about his player spending the day overseas.

“The first impression is he has broken a rib but the number of days he will be out, I don’t know,” Guardiola said. “A day off is to be happy ... I am a trainer who doesn’t want to train every day because [the players]need to rest, mentally and physically.”

Agüero’s injury is the second setback suffered by Guardiola in two days after left-back Benjamin Mendy was ruled out for several months because of a knee ligament injury.

Guardiola confirmed that Mendy will be out until the semi-finals of the Champions League – which begin on April 24th-25th – should City reach that stage.

City play their title rivals Chelsea in Saturday’s late game and after losing both Premier League matches last season against Antonio Conte’s side, Agüero’s absence is a sizeable blow to Guardiola’s hopes of recording a first win over the champions since becoming manager.

Earlier on Thursday night, Agüero had posted a picture of himself on Instagram with the Colombian singer-songwriter Maluma. It is thought Agüero had been attending the singer’s concert before the accident.

Agüero’s first club Independiente tweeted: “Strength and prompt recovery. Everyone @ Independiente is with you in this difficult moment.”

Agüero has so far scored seven goals in eight appearances this season. He is also one goal away from equalling the club’s all-time scoring record, and missed the opportunity to do so from the penalty spot against Shakhtar Donetsk on Tuesday.