Tottenham manager was booked for incident with Southamlton goalkeeping coach 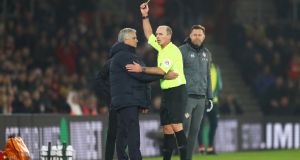 José Mourinho called one of Southampton’s backroom staff “an idiot”, accused the St Mary’s ballboys of being coached to waste time and said VAR “should be rebranded” as his Spurs side lost Harry Kane to a hamstring injury in a dispiriting 1-0 defeat on the south coast.

The Tottenham manager admitted he was booked for being rude to the Saints’ goalkeeping coach, Andrew Sparkes, after venturing into the home dugout to air his frustration at what he felt was Sparkes’ time wasting. “I think the yellow card is fair because I was rude, but I was rude to an idiot,” said Mourinho. “For some reason I was rude. But I was, and because I was rude I deserve the yellow card. Basically, I had bad words with the guy.”

Mourinho also turned his ire on Southampton’s ballboys. “The second half was not easy,” he said. “They were winning, they were defending basically with 10 players, fighting hard and being aggressive, a good aggressive, with lots of fouls, lots of [times]the match stopped and the ballboys were well coached in the delaying of the game and there was not much play.”

The extent of Kane’s hamstring injury is unknown, while Mourinho also bemoaned Tanguy Ndombele’s injury, with the £55m summer signing forced off after 25 minutes after being clipped by Stuart Armstrong. “He’s always injured,” Mourinho said. “He’s injured, he plays one match, [the]next week he is injured. We are full of hope since the beginning of the season. It is a concern. You think you have a player, you think you have a player in the evolution process, he plays very well against Norwich, you are full of hope that he is ready for it but he is not ready for it. It is a situation that we have had since the beginning of the season.” – Guardian