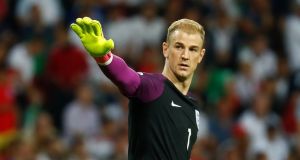 Joe Hart is set to join West Ham on a season-long loan and is due to have a medical with the London club on Monday. The Manchester City goalkeeper would have preferred to join a club permanently but in the end decided that staying in the Premier League, even if it is another loan spell, was a good option in a World Cup year.

Hart spent most of last season on loan in Serie A with Torino after being told by Pep Guardiola in August he was no longer the number one choice at Manchester City following the arrival of Claudio Bravo.

Although Willy Caballero left the Etihad Stadium as a free agent and has joined Chelsea, Guardiola has since signed the Brazilian goalkeeper Ederson from Benfica for £34.7 million (€39.6m).

It is understood City will continue to pay some of the 30-year-old England goalkeeper’s wages, and that the deal will include an option for West Ham to buy at the end of the loan period.

Hart’s City contract does not expire until the summer of 2019 but he was keen to secure regular football in the season ahead to maintain his position as England’s number one for the 2018 World Cup finals in Russia.

“This shirt’s not mine,” he said last month. “It’s not nailed-on mine, it’s no one’s. We’ve got high-quality goalkeepers and I will have to be playing at the top level, to the maximum of my ability, even to get in the squad.

“I am not a robot. Sometimes I do have thoughts about it [the uncertainty]. But there is nothing to get down about.

“It’s another exciting adventure, another move, the next step in my career, the next challenge for me personally. I love personal challenges. I have never shied away from one and I don’t intend to now.”