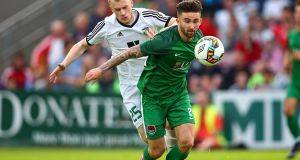 Cork City’s long goodbye to Sean Maguire continues on Thursday evening at Turner’s Cross where John Caulfield will be hoping the 23 year-old can produce another portion of last week’s Europa League heroics as AEK Larnaca come to town.

Domestically, they have been living life in the shadows of APOEL these past few seasons with three straight second place league finishes. But a side built around a decent group of Spanish players have had some good results in Europe, not least in 2011/12 when they beat the two other clubs to visit Ireland this week – Mlada Bolesov and Rosenborg – on the way to the group stages of the Europa League.

Once there, they managed five points from games against Maccabi Haifa, Steaua Bucharest and Schalke 04 and last year, they put Spartak Moscow out before being well beaten by Slovan Liberec.

“There is a strong Spanish influence in their team and they keep the ball very well,” says City boss John Caulfield who has Jimmy Keohane back after a league suspension. “They are very patient, they will keep possession and try to open up the gaps and wear you down to create chances.”

“They have a number of seriously good players and it is a massive challenge to us, we know that, but at the same time, we look back at last year and the experience we gained. We knocked out Hacken and we gave Genk a serious test too, so we know nothing will do other than a top-class performance from us.”

Maguire’s performance may be key to his side’s fortunes again – although City might be in trouble regardless if thet concede twice again – but the visitors also have a striker who might be familiar to Irish fans. Constantinos Charalambides, now 35, scored twice for Cyprus in that impossible to forget 5-2 defeat in Nicosia.

1 ‘Manchester United are lucky to have you’: Klopp responds to Donegal schoolboy’s letter
2 England v Ireland preview: Ireland’s revival to face its sternest test
3 Irish pack must expose the weakness in England’s backrow
4 Michael Schumacher’s family share rare update on condition
5 On healing and wild hurling: The re-education of Diarmuid Lyng
Real news has value SUBSCRIBE
Crossword Get access to over 6,000 interactive crosswords