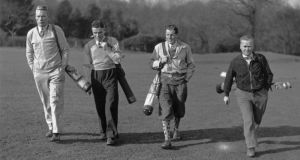 Sheffield, Wednesday afternoon. Up Shoreham Street, on to Cherry Street and here lies Bramall Lane. This has been home to Sheffield United since 1889 and Jimmy Dunne would recognise chunks of it still. Dunne, a Dubliner, was once the talk of this place. In the small club museum, he is again.

“We’re very proud of him,” says club historian John Garrett. “Jimmy’s one of the people who built the club. We’re proud he created this record while he played for us.”

“This record,” Garrett refers to is the one Dunne set between October 24th 1931 and New Year’s Day 1932, when Dunne scored in 12 consecutive top-flight league games. It is the one Leicester City’s Jamie Vardy can equal at Swansea. Suddenly, 84 years on, Jimmy Dunne is back in the news. “Oh, there’s a lot of interest and it’s justified,” adds Garrett.

There is a piece on Dunne in today’s match programme but Garrett says: “We’d love to celebrate this great player more, we’d love the family to come forward.”

Sheffield United would like some artefact to help bring colour back to Jimmy Dunne, although Vardy’s vitality is already doing this. Vardy, a Sheffield boy, passed Ruud van Nistelrooy’s record of scoring in 10 consecutive Premier League games last Saturday but football records pre-date the Premier League. Dunne’s achievement is next on Vardy’s list. Then we can debate Stan Mortensen’s 15 in a row for Blackpool in 1950-51.

Jimmy Dunne was born in Ringsend in September 1905. It was a different time – pre-partition Ireland; Newcastle United champions of England.

By the mid-1920s the teenage Dunne was at Shamrock Rovers, though his progress was stalled by internment.

The Belfast Celtic society describe this as a “mistake” – it was Jimmy’s brother Christy the new Free State government was after – and Belfast Celtic might know. They played Shamrock Rovers for Jimmy Dunne’s benefit match in 1942.

As Sean Ryan notes in his history, The Boys in Green, there was another reason why Dunne had stalled – “the form of the prolific Billy ‘Juicy’ Farrell”.

So, at 20, Dunne got on the boat to Liverpool and joined New Brighton in England’s Division Three North. Within a year, First Division Sheffield United came calling with £800.

“Jimmy was recommended to us by Ernest Needham, a great United captain,” says Garrett. “Jimmy settled in Sheffield. He was here the best part of seven years which suggests he was happy.

“We’d only had Billy Gillespie from Ireland before so Jimmy would have been a revelation to Sheffield. Our supposition is that Billy took Jimmy under his wing – Billy was one of the all-time great characters at the club, captain of the 1925 FA Cup-winning side. Billy’s the reason Derry City play in red-and-white stripes. When he left United, he took over at Derry and took United jerseys with him.”

Sheffield United were a major club then and Dunne had competition. But in 1929 he got into the first team and stayed there. He scored 42 goals in 43 appearances. The following season – 1930-31 – he got 50 in 47 appearances, 41 league goals.

And then came 1931-32. Dunne’s scoring run began on October 24th at Grimsby Town. Sheffield, like every other town, had a Saturday night sports paper then. It was printed on green paper and so became known as the ‘Green Un’. In Sheffield Central Library it is on microfiche and the report from Grimsby says: “It was good to see Jimmy Dunne scoring goals again, and playing with something of his old dash.”

Next up were Liverpool at Bramall Lane. United won 3-0 and ‘Looker On’, reporting in the Green Un, wrote: “Big Bradshaw was never far away from Dunne and so the Irishman could not do very much damage.”

Still, Dunne scored the opener and made it three games in a row against Leicester. That was a defeat but the next game was a 4-0 home win against Bolton and the subject of Dunne’s heading ability was on the agenda. There had been a claim from Lancashire that Dixie Dean was the best header of a ball in football. The Green Un’s ‘Big Blades’ column disagreed: “Last Saturday it was hard to conceive that anyone, I don’t care who it is, can be better than Jimmy. I must dispute the claim that Dean is better. Jimmy’s two goals and the one he made for Oswald were masterpieces.”

In the Sheffield derby that followed, United lost at Hillsborough but Dunne scored – again with his head. He then declined a call-up from the Belfast-based IFA, though he had played for them five times before and would do so twice again. For the FAI he won 15 caps.

“Jimmy has nothing to say by way of explanation and no one can blame him for that,” said the Green Un of his refusal. It can be assumed Dunne could do little wrong in Sheffield at this stage.

On went the run. Chelsea were beaten 4-2 at Bramall Lane and before the next game, at Middlesbrough, the local paper said: “Dunne has not been scoring ‘hat-tricks’ like he did last season for the simple reason that all opposing pivots make a mark of him.”

Equally notable was that Alf Common, the first ever £1,000 transfer in history, was there. Common had played for both United and Middlesbrough. History man watched history man.

Dunne then scored against Aston Villa, with a “clever shot”, and his run was noted for the first time: “Jimmy Dunne has scored in his last eight games.” Sheffield United were fourth in the table.

Newcastle were next to suffer and when United had their Christmas double-header against Arsenal – home Christmas Day, away St Stephen’s Day – the Blades won both. Dunne scored in both.

“The scoring power of Jimmy Dunne has been maintained,” roared the Green Un proudly. “Today is the eleventh successive Saturday in which Sheffield United’s centre-forward has found the net, in league or international football. It’s fine going.”

What they had noticed, and what Vardy will notice, is that the Saturday before the Sheffield sequence, Dunne had scored for Ireland – the IFA Ireland – against England at Windsor Park. So when he then scored against Blackburn on New Year’s Day 1932 it was his 12th consecutive league game scoring but his 13th match overall.

The day after Blackburn, United were at Portsmouth. They lost and Dunne, “the genial Irishman”, did not score, though he did the next week in the FA Cup.

The run was over.

No one crowed about records but Herbert Chapman, Arsenal’s great manager, understood. A Sheffield man, who had played for United, Chapman tried to sign Dunne in March 1932 and was rebuffed.

But 18 months after that record run, the Green Un reported breathlessly: “Jimmy Dunne, darling of the Bramall Lane crowd, was transferred to Arsenal this morning in a lightning operation. When United sent to his lodgings, Jimmy was in bed. Once he had reached Bramall Lane, however, things went forward in very quick time, and almost the next thing was that he was an Arsenal player, catching the 11.05 train to London in order to assist his new club against Middlesbrough.”

Arsenal won the league that 1933-34 season; Sheffield United were relegated.

Dunne was at Arsenal for three years during which he made his first Ireland appearance in Dublin, against Switzerland. Ireland won 1-0; scorer, Dunne. As Sean Ryan writes: “The [record 32,000] crowd got the result they wanted and it was secured by the man they had come to see.”

Ryan adds that Dunne was a popular team-mate not just because of his goals – “he always brought his button accordion”.

After Arsenal there was a move to Southampton, then Dunne returned to Shamrock Rovers, a club he later managed.

His two sons, Tommy and Jimmy, both had successful careers in the League of Ireland but their father did not see this. He died, aged just 44, in 1949.

Dunne had been to see Ireland play Sweden at Dalymount Park the day before, reported the Sheffield Star, which said: “His passing will come as a great shock to Sheffielders with whom he was unfailingly popular . . . Dunne’s leadership often possessed the quality of genius . . . Soccer is infinitely poorer with his passing.”

It was some tribute. Thanks to Jamie Vardy we are reading it again.