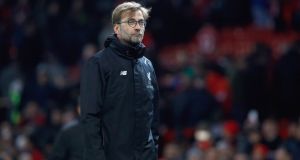 Jurgen Klopp: the Liverpool manager disclosed that Fifa had informed Liverpool they will review the Joël Matip situation on Friday. Photograph: PA

Jürgen Klopp will consult Liverpool’s lawyers over whether to select Joël Matip at Plymouth Argyle amid concern the defender’s inclusion could result in the club’s expulsion from the FA Cup.

The Liverpool manager is in the farcical position of needing legal advice over his team selection for the third-round replay having failed to get clarification from Fifa or the Cameroon football federation over Matip’s eligibility.

Matip was not selected in Cameroon’s final 23-man squad for the Africa Cup of Nations and, as far as Liverpool are concerned, retired from international football in 2015. But the club have not received confirmation the defender can play for Liverpool during the tournament without threat of sanction, prompting his withdrawal from the squad who faced Manchester United at Old Trafford last Sunday.

Fifa will decide on Friday whether Matip has a case to answer and, if so, Klopp admitted it could be “another seven or 10 days before we get a decision”. That would have implications for Liverpool’s games against Swansea City in the Premier League on Saturday, the EFL Cup semi-final second leg against Southampton and an FA Cup fourth-round tie at home to Wolverhampton Wanderers should they defeat League Two Plymouth. As for the replay on Wednesday, Klopp will consider “any new information, if there is any”, before deciding whether to give Matip much-needed game time.

“As you can imagine, we are in a lot of talks,” said a clearly exasperated Liverpool manager. “We’ve done transfers quicker than this. It’s already long term but now it’s getting really tense on our side. We’ve tried everything but at the end I have to make the decision. Of course I have to ask [Liverpool’s lawyers] but the decision is for me to make. I could put him in the lineup. I don’t think the referee is going to say: ‘Stop, stop, you cannot go on the pitch.’ But I will do it when it’s OK from our point of view. Of course I need advice – I’m not a lawyer.”

Klopp admitted Liverpool could risk expulsion from the FA Cup, a Fifa-recognised tournament, if Matip is deemed to have been ineligible for club football during Cameroon’s participation in the Cup of Nations. The FA would take its lead from whatever Fifa decides. “That’s the next thing, we don’t know,” Klopp said of potential consequences. “Most of the time in life you know if you do this, then you get this. But it’s not 100 per cent clear what happens [if Matip plays]. We try everything to win football games. If this can happen – out of the tournament or whatever – then we have to decide about the risk. He’s ready to play for us and that makes it difficult.”

The Liverpool manager cited Sadio Mané’s participation with Senegal in Gabon as evidence the club have no issue with the Cup of Nations and believes the saga could have been resolved easily by Fifa’s president, Gianni Infantino, or the Cameroon football federation president, Joseph Owona. “It’s not about blaming anybody but you can imagine it’s not too easy to get in contact with the decisive people,” he said. “The decisive people are the president of the Cameroon FA and Mr Infantino from Fifa. What we need is a letter. It’s clear that he is retired, but what we need is a letter from the official side of Cameroon that says the player is released and can play for Liverpool.”

It is believed Matip did not put his retirement in writing to the Cameroon FA but Klopp insists Liverpool should not be punished for a technicality that occurred when the 25-year-old was at Schalke.

He said: “We were not involved in this process because it was before he was our player. With rules like they are now, one side can say: ‘Yes, we did a letter.’ Nobody told the player when he retired that he must sit together with his national coach and says he doesn’t want to play and then the coach says: ‘OK, but I need a letter.’ Maybe the former club could have said: ‘Don’t forget, you need to write a letter on that.’ When he came here for us, it was clear he didn’t want to play for Cameroon. Maybe you could have criticised us for not asking to see the letter but it’s all about when do you say he was retired? He wasn’t picked for more than a year by Cameroon.”

The Liverpool manager confirmed Loris Karius would start in goal against Plymouth and the 19-year-old Harry Wilson could also be involved. Klopp indicated he was unlikely to select a team as young as that involved in the goalless draw with Derek Adams’s side at Anfield.