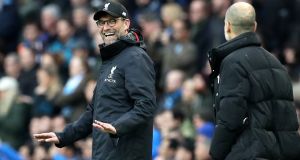 Liverpool boss Jürgen Klopp insisted Manchester City remain the best team in the world ahead of their crunch clash at the Etihad on Thursday. Photograph: Martin Rickett/PA Wire

Jürgen Klopp has said Manchester City remain the best team in the world despite the recent slump that has left them trailing Liverpool by seven points ahead of Thursday’s crucial Premier League game at the Etihad Stadium.

Pep Guardiola, the City manager, bestowed that mantle on Liverpool following a run of nine consecutive Premier League victories that has given Klopp’s side a commanding lead in the title race. His Anfield counterpart accepts that may be true on current form but insists Liverpool’s unbeaten league campaign faces the biggest test imaginable against the reigning champions.

“It is one of the most difficult games you can play in the modern football world, away at City,” said Klopp. “We felt that plenty of times. It’s a really strong football team with an outstanding manager.

“We have to be prepared as good as possible, we have to be brave, full of desire, angry – all that stuff, like in all the other games. The opponent, for me, is still the best team in the world. It’s 100 per cent my opinion because of the way they play, the things they achieved, the ability and all that stuff. Nothing changed. Only the points changed, but not the preparation for the game.”

As for Guardiola’s rich praise for Liverpool, Klopp elaborated: “I heard it. He said: ‘In the moment’. Yes, with the record we had in December – I’m not sure if another team had a record like this in December – we are in a good moment. And we are a very, very, very good football team as well so that’s why we have the amount of points [we do] but we prepare for one game.

“Would I say they are the best team in the world if nobody would ask me? No. But we talk about it. It sounds like we go there and we are more likely to win the game then they are. It’s just not true.”

City have lost three of their last five league matches, prompting Guardiola to claim their title defence would have been over had they not defeated Southampton on Sunday.

Klopp admits Thursday’s fixture provides an opportunity to turn the season either way.

The Liverpool manager added: “You have to ask Pep why he said it. If we would be 10 points behind then would my first thing after the game be to say: ‘We still will catch them!’ Of course not. It’s difficult with the qualities all the teams have, but it’s just not important what happens.

“It’s the third of January, it’s a very, very important game for both teams and I would use it as motivation for the other team. These kind of six-point games, it’s how it is, we play against each other and can pretty much go in all directions. It’s a motivation for them, 100 per cent. They will be ready and we have to make sure that we are ready, that’s all.” - Guardian