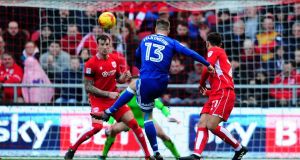 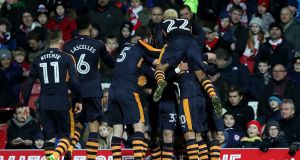 Newcastle United’s Daryl Murphy is mobbed by team-mates after scoring his side’s second goal in their Championship win over Brentford. Photo: Simon Cooper/PA

Goals from Dwight Gayle and Daryl Murphy saw Newcastle go top of the Championship standings after a 2-1 win over Brentford at Griffin Park.

Lasse Vibe’s second half equaliser was not enough to earn the Bees the share of the spoils their performance deserved as the Magpies withstood a late barrage to take all three points.

Gayle gave the Magpies the lead after 20 minutes, racing clear down the left and cutting inside before rifling an unstoppable shot across Bees keeper Dan Bentley into the far corner.

But Danish striker Vibe hit back for a revitalised Brentford just after the break when he lashed home a loose ball in the box after United’s defence failed to clear a corner.

Murphy, who replaced the injured Gayle on 27 minutes, popped up with 11 minutes to go to coolly glance home Ayoze Perez’s exquisite cross with his head and earn United all three points.

The gloss was taken off the result with the loss through injury of Gayle and substitute Vurnon Anita just moments after he had come on as a second half substitute.

Newcastle started brightly and Gayle came close to giving the visitors the lead with just two minutes on the clock, but his low angled drive was deflected into the side netting by Harlee Dean.

Brentford looked overawed by Rafa Benitez’s side in the opening exchanges and Gayle had two more good opportunities to break the deadlock.

But as the half wore on the Londoners grew in confidence, matched United’s physicality and asked questions of their nervous looking defence.

A Josh McEachran corner eluded everyone in the Newcastle box as the back four played statues, before Gayle raced up the other end to open the scoring with a quality strike.

Vibe should have pulled his side level two minutes after the opener, but Karl Darlow in the Newcastle goal saved the tame effort with his feet.

Seven minutes after his goal the game turned with Gayle firing a long range effort well wide before limping off with what looked like a hamstring pull minutes later.

But the Magpies continued to press forward and Bentley had to react quickly to race off his line to thwart Perez who was on the end of a slick passing move that carved the Bees defence apart.

Vibe should have done better on the half hour when he raced onto Dean’s defence-splitting through ball but fired straight at Darlow.

Isaac Hayden fired wide for the visitors after the Bees’ leveller, but from then on in it was Brentford who dominated proceedings with Ryan Woods and McEachran dictating proceedings in midfield.

Vibe saw yet another low drive saved by the legs of Darlow but his best effort of an enthralling end to end second half came just after the hour mark.

He was played in by a beautiful flicked pass from Romaine Sawyers and chipped Darlow only to see his clever effort bounce back to safety off the far post.

The luckless striker went close again with time ticking by, this time a toe-poked effort bobbled agonisingly past the far post.

After Murphy’s late strike, Brentford threw the kitchen sink at their visitors who rode their luck repeatedly to cling on for the points.

Vibe was sent flying in the box but the Griffin Park fans were incensed as late substitute Philipp Hofmann almost had his shirt ripped off his back in only for referee Chris Kavanagh to wave play on.

Pilkington’s goal, his second of the match, came five minutes from the end as improving Cardiff made it back-to-back wins in the Championship while leaving their opponents in further trouble.

Lee Johnson’s side have now lost 10 of their last 11 league matches, with their most recent victory coming against Ipswich at the start of December, to see them tumble down the standings.

All the action came in the second half. Bristol City went ahead in the 51st minute when Joe Bryan’s volley from just outside the box hit the crossbar and then struck the back of diving Cardiff goalkeeper Brian Murphy, who conceded an unfortunate own goal.

The home side looked comfortable until the 74th minute when Mark Little conceded a totally unnecessary penalty by tripping Joe Ralls with the ball heading away from goal. Pilkington drove the spot-kick down the middle to equalise.

Tammy Abraham’s 18th goal of the season, an overhead kick from a Milan Djuric knock-down, put the Robins back in front in the 78th minute.

But visiting substitute Kadeem Harris got the better of Bryan at the far post to head a second Cardiff equaliser eight minutes from time before Pilkington found the top corner with a right-footed screamer three minutes later to earn the visitors all three points.

Despite a heated atmosphere for the noon kick-off, the first half was low key. Cardiff registered the first goal attempt after eight minutes when Peter Whittingham’s fierce shot from distance was deflected over.

Bryan had a shot blocked by Sol Bamba as the hosts began to press and in the 25th minute Bryan forced a diving save from Murphy with a low 25-yard drive.