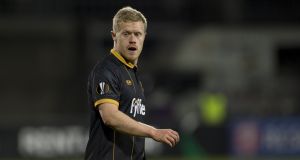 Daryl Horgan makes his first start for Preston North End today after his move from Dundalk.

The winger made his debut off the bench against Arsenal in the FA Cup last weekend and has now forced his way into the starting lineup for the clash withleague leaders Brighton at Deepdale.

The 24-year-old will start alongside Aiden McGeady, while Andy Boyle – who moved with Horgan from Dundalk – hasn’t made the squad.

Meanwhile, the duo’s former teammate, Richie Towell, has been dropped from the Brighton 18 by Chris Hughton despite impressing against MK Dons in the cup last weekend.

“I thought they were very good against Arsenal and probably in the first-half period, should have been further ahead,” Hughton said of Preston.

“Then, of course, our games against them in recent seasons have all been very tight, so we certainly know what to expect.

“They are a team that can change their formation; I think we know how they’ll play as a team, the endeavour they have, and they’re an incredibly hard-working team.

“They have a manager (Simon Grayson) who’s done very well in the period of time that he’s been there, since they were promoted, and we expect a very tough game.”