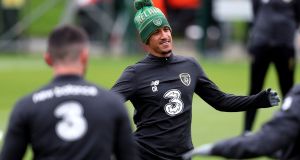 Who could have imagined on the night Ireland’s place in the Euro2020 playoffs was confirmed just how much would have changed by the time the first of the games finally came around? Two postponements on, it’s a different Ireland in every sense.

Stephen Kenny and his players head for Slovakia on Tuesday with the availability of Harry Arter the only real issue hanging over the squad. The 30-year-old had a scan on a thigh strain at lunchtime on Monday in England and the association declined to say whether a decision had been made by the evening.

Given the restrictions around team travel, the prospects of Arter hooking up with the squad do not seem great at this stage.

His absence would narrow the manager’s options in midfield, although the selection would still seem nothing like the sure thing it looks to be in defence with Séamus Coleman ruled out.

Up front, meanwhile, Kenny has plenty to wrestle with and much might depend on whether the Dubliner is completely convinced come match time that Callum O’Dowda has shaken off the groin strain that has kept him on the sidelines since he suffered it playing against Finland.

Aaron Connolly sat out the first part of the squad’s first training session of the week on Monday but is said to be fine while David McGoldrick is in much better shape than last month and looks to be the favourite to start up front.

Callum Robinson, though, is eyeing up every position across the frontline with a view to catching Kenny’s eye in the event there is an opening. The 25-year-old has been building a bit of a case for inclusion over the past few weeks with a series of starts as West Brom’s lone striker and a few goals too, most memorably the two against Chelsea in that remarkable 3-3 draw.

The manager admitted last week that the striker’s performances have changed the way he regards Robinson and the former Preston and Sheffield United player is happy to be viewed in a slightly different light.

“I’m enjoying my time at the moment with West Brom,” he says. “I’ve obviously started the first four games of the season and was involved in one of the cup games and got myself a few goals, so I’m obviously positive going into the game.

“I’ve got to wait on the gaffer’s selection, but I’m just going to keep working hard and try to do well in training over the next few days and see how it goes.

“It’s obviously nice for him to know that there’s another option there if needed. I’ve been playing up there in the Premier League, which is a top league. He knows I can play in any of the three [positions across the frontline] but it’s probably just a little bit more of an eye-opener that I’ve played up there and scored a few goals.”

Robinson got on in both of last month’s games and might well have had his second international goal against the Finns. He admits that the result was a body blow to everyone in the Irish team but feels fitness was a key issue given that lack of club games in advance of the Nations League ones.

“It’s just common sense,” he says. “If you’re fitter, you don’t have to worry about your legs blowing up early. You’re sharper – your touches, your awareness, everything . . . You normally have a six- or seven-week period to get to that point; we only had three and then you’re playing against teams whose club sides have started.

“I thought we still did well, but the way the manager wants us to play we still need that extra 15 or 20 per cent with the press etcetera. I assume [in Bratislava this week] we’re going to go there positive and try and attack them; stop them playing. It’s obviously down to the manager what he wants to do, how he wants to try to get the win but I assume it’s to try and force the issue and that extra 15 or 20 per cent can take you a long way.”

To Belfast or Bosnia Herzegovina, hopefully, although given the ongoing coronavirus pandemic and the impact it is having just now on the national mood, Robinson reckons a win this week would be enough to be getting on with.

“Yeah of course, through these sad times at the moment, I would say football in general is keeping people healthy, helping people’s heads, being at home a lot and watching the games . . .

“Winter is coming as well and that’s a bit of a downer with the virus so football is obviously a massive thing and if we can get that win for the country on Thursday and put a smile on people’s faces then that would be massive.”

1 Waterford turn Kilkenny upside down and inside out
2 Jim McGuinness: There is a way to save championship and make it competitive
3 Waterford’s frenzied waves of attacks too much for Kilkenny
4 Sordid murder of hurling brothers still resonates in south Galway
5 Once in a blue moon: Cavan’s overnight success 15 years in the making
Real news has value SUBSCRIBE
Crossword Get access to over 6,000 interactive crosswords