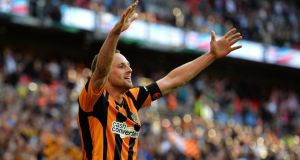 Some of their fans insist they must stay City, others would like to make Tigers a formal part of their name but one thing all Hull supporters can now agree on is that it is wonderful to be able to call their team FA Cup finalists. Never before in the club’s 110-year existence have they had that pleasure.

For 45 minutes it looked like their wait would go on. Deservedly trailing 2-1 at half-time to a Sheffield United side intent on once again belying their League One status, Hull re-emerged for the second half as a far more vibrant side and goals from Matty Fryatt, Tom Huddlestone and Stephen Quinn and David Meyler earned them a return to Wembley, where they will assume the more familiar role of underdogs in the final against Arsenal.

Jamie Murphy scored in the 90th minute to spark hopes of a United comeback but Meyler extinguished them moments later by rounding off a counter-attack to make it 5-3.

Sheffield United were left to reflect on a valiant Cup run, an excellent first-half performance and just how close they came to becoming only the second team outside the top two tiers to reach the FA Cup final.

Their fans prefer not to remember the first time – because United were the surprise victims in 1901, when non-league Tottenham Hotspur clinched the trophy – but here they began as if convinced they could make a happier entrance into history.

The Blades started far sharper than their Premier League opponents, who seemed petrified by the occasion and their status as heavy favourites. Despite being far more brawny, Hull were being bullied by a team playing with no fear. They could not cobble together a move of note in the early stages, even if they did muster the match’s first shot, a hopeful effort from the half-way line by Huddlestone, who had spotted goalkeeper Mark Howard dangerously far from his goal. In keeping with Hull’s tame opening, the shot lacked enough power and accuracy to punish the goalkeeper.

Not only did Hull seem nervous, they were being dominated tactically. Nigel Clough has inspired a revival in United’s fortune since taking charge of them in November following the brief and naively idealistic reign of David Weir.

Clough’s designs ensure his team’s dreams are built on a sound foundation. Having already beaten four teams from higher leagues to set up this semi-final, he devised another canny plan and it reaped reward in the first half.

Playing without a specialist striker –Jose Baxter, a midfielder, instead served as a false No9 – United swarmed all over Hull in the attacking half of the pitch. Hull looked frazzled. With Yannick Sagbo struggling to make any impact up front in the absence of the Cup-tied Shane Long and Nikica Jelavic, and Hull utterly devoid of width, the top-flight team were bereft of ideas. And they were getting even the basics all wrong.

United had not forced Steve Harper into a save but still deserved the lead when it came. Hull negligence allowed John Brayford to receive the ball back after taking a throw-in and then curl a sweet cross in from the right wing and Baxter, who challenged for the ball with James Chester, nudged it into the net from close range.

Still the Tigers could not find a roar. The underdogs were looking so comfortable that their fans sang giddy “olés” as United stroked the ball around with style. It proved premature. Three minutes before half-time Hull produced the first vignette of Premier League class and drew level. Jake Livermore swapped a snappy one-two with Ahmed Elmohamady before delivering a dangerous low ball into the box. Sagbo peeled off his marker and planted the ball into the roof of the net.

Relief swept through the Hull – but they reclined too much. United regained the lead within two minutes. Murphy showed greater strength and desire as he surged past Liam Rosenior on the left and crossed for Stefan Scougall, who darted between two Hull players to fire first-time into the net.

Hull’s manager, Steve Bruce, had to do something to stir his team while gaining a firmer hold on the match. He introduced two strikers for the second half and rejigged his formation.

Those changes paid swift divided. One of the new arrivals, Matty Fryatt, equalised in the 49th minute, sweeping the ball into the net from close range after a Huddlestone corner had provoked a frantic scramble in the United box.

Huddlestone, largely bypassed in the first period, then put Hull in front. After collecting the ball in midfield he fed Meyler before lumbering forward to receive the return pass, shrug off Michael Doyle and finish smartly from 15 yards.

United tried to rally but their first-half efforts had taken their toll and Hull were not about to suffer a relapse. Hull’s fourth goal was scored by Quinn, a former United trainee who had been applauded warmly before the match by the fans in red and white for the seven years he spent at Bramall Lane.

Quinn, Bruce’s third substitute of the game, headed into the net in the 67th minute after nifty work down the left by Meyler and Livermore.

United, defiant to the end, refused to accept their fate without a fight and made Hull sweat by cutting the deficit in the 90th minute, Murphy rifling the ball into the net from 12 yards after a strong run down the right by Bob Harris.

But Meyler made sure of Hull’s victory by crowning a flowing counter-attack with an emphatic finish in stoppage time.