Gunners into third as Everton slip up 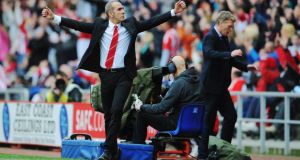 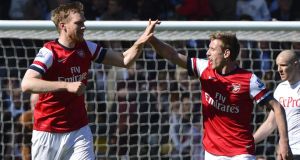 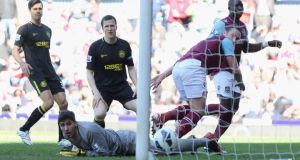 The relegation woes of all three teams at the bottom of the Barclays Premier League intensified as they all suffered defeats on Saturday.

Wigan were beaten 2-0 by West Ham at Upton Park while QPR lost by the same margin against Stoke and Reading were unable to overcome Norwich at Carrow Road.

The defeat for Wigan looked to be the toughest of them all as they deserved more from their clash with the Hammers but they were unable to find a way past Sam Allardyce's side.

The defeat now leaves them three points adrift of safety and Aston Villa, who play Manchester United on Monday night.

Hammers winger Matt Jarvis did the early damage when he fired in a teasing low cross from the left which missed the swinging legs of both Kevin Nolan and Mohamed Diame to fly into the far corner of Joel Robles'net.

Nolan then scored his 100th career goal after the break after Andy Carroll helped on a long free-kick which fell into his path, allowing the midfielder to hook the ball into the net and issue a hammer blow which inched Wigan one step closer to relegation.

It was a bad day for the other two sides in the relegation zone as both QPR and Reading were unable to claim any vital points.

Stoke beat rock-bottom QPR 2-0 as they eased their own relegation worries but piled even more pressure on Rs boss Harry Redknapp at Loftus Road.

Peter Crouch fired the opening goal against his former club from close range just before the half-time whistle after almost giving Stoke the lead through a 25-yard volley which was dealt with by home keeper Rob Green.

Crouch then won a penalty for the Potters after the break following Clint Hill's challenge, which was duly converted by Jonathan Walters.

Norwich claimed a vital three points against struggling Reading to help ease their own relegation worries after they scored two goals in two minutes to seal a 2-1 win at Carrow Road.

Ryan Bennett scored the opener five minutes after the break after Reading keeper Alex McCarthy managed to keep out Grant Holt's volley but was unable to take the ball cleanly, with Bennett sweeping the ball home from eight yards.

Elliott Bennett then added the second moments later when the Reading keeper punched away a cross, which Elliott Bennett controlled on his chest before firing into the net.

Reading pulled one back through Garath McCleary's 25-yard strike in the 72nd minute but it was not enough to salvage any points as their top-flight future looks increasingly bleak.

Everton's hopes of reaching the Champions League were dealt a major blow after they were beaten 1-0 by Sunderland at the Stadium of Light.

Stephane Sessegnon, who was one of the star performers for Sunderland in last weekend's Tyne-Wear derby win over Newcastle, drilled home from 20 yards with Tim Howard unable to keep it out.

Meanwhile, Newcastle drew 1-1 with West Brom at The Hawthorns.

Yoan Gouffran raced in to meet Papiss Cisse's floated cross to beat Ben Foster in the first half before Billy Jones equalised for the home side after the break.

Romelu Lukaku made his presence felt in the Newcastle box to outmuscle the defence and lay the ball off to Jones, who duly scored.

Fulham were beaten 1-0 at home to Champions League-chasing Arsenal after Steve Sidwell was sent off in the 12th minute.

The midfielder, in his first game back from suspension after he was sent off against QPR, was shown another straight red card after he lunged in on Mikel Arteta and caught him on the ankle.

Arsenal also finished the game with 10 men after striker Olivier Giroud was sent off in the 90th minute, but they were able to seal the win after defender Per Mertesacker gave them the advantage on the stroke of half-time.

In the other game, Swansea and Southampton drew 0-0 at the Liberty Stadium.