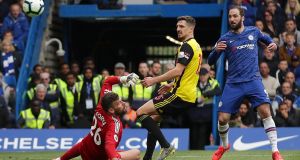 This encapsulated Chelsea’s bizarre campaign of extremes. There had been heckles from the home support as the players retired at the interval with the hosts fortunate still to be level, all the festering doubts over Maurizio Sarri’s stewardship exposed yet again, only for those jeers to be choked within the opening few minutes of the re-start by a taunting of Tottenham Hotspur. The Italian’s team ended the afternoon in third place, having leapfrogged Spurs, and one win from Champions League qualification.

The doubts will resurface while this team’s displays veer from the sublime to the ridiculous so regularly, but Chelsea are still likely to achieve their season’s objectives of a return to Europe’s elite competition.

Watford, such awkward opponents and the dominant force through a one-sided opening period, were dismissed in those frantic exchanges at the start of the second half with a difficult occasion suddenly transformed into something of a breeze. Sarri even threw on Gary Cahill for a first appearance since November for the final few minutes, granting the club captain the send-off he deserves after a glittering career in these parts.

That helped ensure the post-match lap of appreciation was conducted in more celebratory mood than had seemed likely back when Watford were running rings round the home side.

For once, Sarri’s half-time team talk had instigated an immediate upturn with Eden Hazard, previously peripheral, revived and Ruben Loftus-Cheek injecting urgency to Chelsea’s approach. The England midfielder had headed the hosts ahead, reaching Hazard’s gloriously clipped cross to power his effort beyond Ben Foster. Within minutes, David Luiz sprinted late into the six-yard box to meet Hazard’s corner and effectively complete the victory.

Even Gonzalo Higuain, so desperately ponderous in his play up to the interval, roused himself to clip in an exquisite third before the end after darting behind Craig Cathcart to reach Pedro’s shrewd pass. Olivier Giroud, Higuain and Pedro might have added further plunder as a side who had initially appeared so deflated tore into the FA Cup finalists with relish.

It all ended up feeling like a breeze, as if the toils of the opening period were a fabrication. There is no fathoming Chelsea’s form at present. They are wildly unpredictable, but, according to the Premier League table, the third best team at present.

Something had clicked at the interval. By then, Watford’s energy, and no little quality, should already have established a healthy lead with the chorus of boos which had greeted the home players as they departed the turf at the break reflective of familiar local frustration.

The urgency had been with the visitors, with the restored Troy Deeney dominant in the air, bullying centre halves while Abdoulaye Doucouré, Gerard Deulofeu and Roberto Pereyra swarmed unchecked through midfield. The loss of N’Golo Kanté early on through injury had unnerved the home side. They were grateful to Kepa Arrizabalaga and their opponents’ profligacy for maintaining parity.

The most eye-catching of the goalkeeper’s saves had denied Deeney’s early header, the Spaniard leaping acrobatically to his right to push the ball on to the post with his left hand before Will Hughes blazed over the bar.

There were four other excellent opportunities carved during that frantic opening quarter, spurned by Doucouré, José Holebas and Deulofeu, three times, with Chelsea grateful merely to be clinging on.

By the time Holebas was clipping the crossbar late on, or Isaac Success seeing a goal ruled out with his first touch after his header flicked from Andre Gray, standing in an offside position, the visitors were forlorn in a hopeless game of catch-up. They must have ended as bemused as the on-lookers as to how this match had been surrendered so spectacularly. – Guardian